Formed in 2014, Those Damn Crows are a modern five-piece rock band from South Wales.  They’ve come a long way since declared  “Ones To Watch’ in 2017 by Planet Rock and ‘Band Of The Week’ by Metal Hammer Magazine in 2018. Two albums in, and with their second album ‘Point Of No Return’ impressively hitting the UK charts at Number 14 on February 2020.

Having recently signed with Earache Records, touring, playing festivals such as Ramblin Man, Steelhouse, HRH, Giants Of Rock, Planet Rockstock and now scheduled to open the Saturday on the main stage at Download in 2021, they continue to soar!

Energetic, loud and entertaining are three words that instantly come to mind when I think of a ‘Crows’ gig. Each member of the band owning the stage in their own right, yet coming together perfectly to make the quintessential rock band both visually and audibly. Having seen them twice, as well as being lucky enough to shoot them once in Manchester for the launch of their second album, Those Damn Crows have that magic ingredient that keeps you coming back for more. That’s an understanding and an appreciation of their fan base who become just as a big a part of the show as the lads themselves. This, naturally, makes for a fantastic gig to shoot.

(Shiner)
Well is anybody really sane?  Haha.
I guess I try not to think about all that too much, what’s going on and what we SHOULD’VE been doing etc (Shows) ‘Cos all that going around inside your head can play games with you and make you more insane than the joker. Haha!

Have you enjoyed performing online whilst in lockdown or do you find it hard without an audience?

(Shiner)
Any time I get to play live with the boys is great fun. In these mad times, it’s just no crowd. But it’s still us 5 playing live on a stage. So we just do what we do to the best of our ability at that moment. We can’t wait for the day when we walk out on that stage to a packed out place again. I’m sure the audience is feeling the same about coming along to watch. That goes for any type of event that an audience can attend. Fingers crossed we can make a noise together very soon!

Who or what inspired you to create music?

(Shiner)
I have an early memory of watching Back To The Future and that part was Michael J fox is playing Johnny B Goode. Thinking what the fuck is that coming out of that funny shaped instrument. It turns out to be the amazing guitar part haha. Another one I got is Iron Maidens bring your daughter to the slaughter. That was the Saturday afternoon ‘Chart Show’ on ITV. So I think the seed was planted in those moments. Riffs and meaty guitars, I didn’t learn to play guitar until years later mind. After hearing Nirvana’s nevermind, I then decided right I’m going to learn to play. I’m still learning every day… Which keeps it interesting.

You played Download last year! How did it feel walking out on that stage for the first time?

(Lloyd)
Walking out onto the dogtooth stage at download was somewhat surreal! We have always dreamt of playing that festival, like pretty much any band out there!  To see the tent absolutely rammed meant only one thing, you are in for some feel good rock n roll. The only way I can describe it is that it was just absolutely electrifying from start to finish! As we all say, it’s one to tick off the bucket list!

(Lloyd)
Photographs play a huge part in our live show! It’s always a good sign to see the pit full with photographers just as much the audience with their phones in the air! It’s kinda like the new “lighters in the air” a photograph can tell a thousand stories and it gives our audiences something to take home and remember especially when our frontman sometimes decides to… Go on a wander!

What are your thoughts on the ‘first three song and out’ rule for photographers?  Are you aware of it and do you care about it?

(Shane)
I understand it, BUT, because of the type of band we are, there are opportunities for some great shots later in our set, where we get up close and personal with the crowd and I feel that because of that 3 song rule, we, the crowd and photographers get cut short.

(Shane)
Yes pretty much…. because I’m on and off the stage regular through the set I can kind of be a nightmare for photographers as I don’t stay in one place long enough for a decent shot haha! (Sorry)

How has the internet benefited/impacted you as a band?

(Dave)
This particular band has only ever known a ‘post-internet’ world. We see it as a positive thing. It gives us the means to stay in constant contact with our fan base ( which is important). It also serves as a quick and efficient way of getting information out there at the click of a button. I’m certain we wouldn’t have gained as much traction as we have over the past few years without it!

(Dave)
We usually look for something that captures what we experienced during that particular shot. Good atmosphere and lighting I guess!

(Shane)
Never really thought of it like that, but the answer is definitely yes.  A great shot can show people who haven’t seen The Crows before what it’s like and what to expect to see at one of our crow shows!

(Shane)
I suppose… if we’re doing our job there should be plenty of opportunities for a photographer to take his shot. The perfect photo can sum up a moment in time perfectly, so I think its a two way thing. A photographer can’t get an amazing shot if we’re not doing something outside the box!

With so many dynamics, who is the band loves the camera the most?

(Ronnie)
With our band having multiple characters who light up when hitting the stage must be great for anyone with a camera. We’re known to be very energetic and animated when it comes to performing. We absolutely love it when photographers capture special moments as we can become oblivious to what’s going on, as performers we’re focused on the moment, That electricity, the atmosphere becomes a real wave of emotions and whilst connecting with the crowd everything else can become a blur.

(Shane)
Sometimes there are times where we need our own time/space before a show, just to get our head in the game and focus on the show and what we’re about to do on stage. Recently we’ve been talking about having photos, videography included to document and show our fans what it’s like pre show, soundcheck, backstage and post show. The ups and downs for a band on tour is really quite difficult to describe. Photos or videos could really tell our story.

I remember at Stylus in Leeds earlier this year, Shane did a complete circuit of the room mid song without missing a beat despite spilling someones beer, I was so impressed.  What’s been your most memorable show?

(Shane)
Haha! I do like to get about… And just for the record, I got them another drink!

We’ve been lucky to have had several memorable shows, Download last year in a packed out tent at the Dogtooth stage, from hearing the crowd sing Blink Of An Eye at Steelhouse Festival then to hear the crowd roar Those Damn Crows at Planet Rocks Winters End!

Our Crow family (fans) are always there to make our shows memorable, as a frontman I try and get the audience involved at every possible opportunity, whether it be getting in the crowd, going to the back of the room, VIP area, disabled area, or up to the balcony, my job is to make a large room as small and intimate as possible by getting everyone I can involved!

(Lloyd)
The whole smartphone generation is as equally good as it is bad in my eyes, I totally understand that it can upset people in the audience especially when they have to watch a band through the phone screen of the person standing in front of them, but it really does have a plus side

As well, it is a great way of someone promoting your band by taking videos and posting them on the internet for the whole world to discover! You never know who’s watching anymore. Which is actually quite special, not forgetting it kinda makes you on top of your game because you only have one shot up there so we have to get it right!

(Ronnie)
We would love to play a show with the Foo Fighters. As a band, they have inspired us so much since the beginning. We love how they keep evolving. Performing in stadiums but not losing that connection with their fans is something only the greats can achieve, and to be able to gain any experience working with them would be incredible and would help us grow.

(Ronnie)
None of us have any experience in photography, I’d say the only thing from a band perspective is buy a good camera and spend time learning how to work with it in many different environments, especially venues with bad lighting, to be able to capture a great picture with everything working against you can only make you better.

So what’s next for Those Damn Crows?

(Ronnie)
2021 Is already looking amazing with some real bucket list moments. But we’re gonna keep working hard and be as proactive as possible, don’t take the foot off the pedal and create as many goals as possible. It’s definitely not an industry where you can sit back and expect everything to come to you. 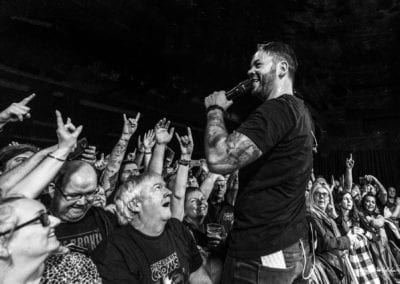 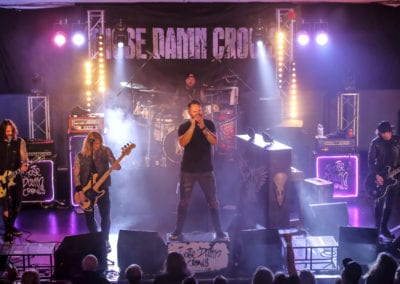 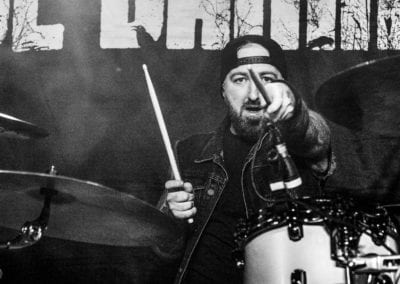 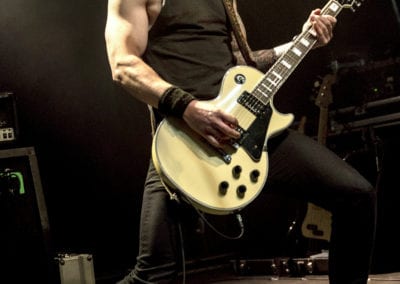 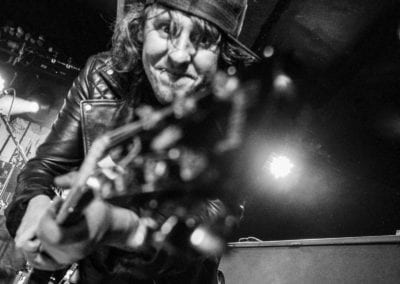 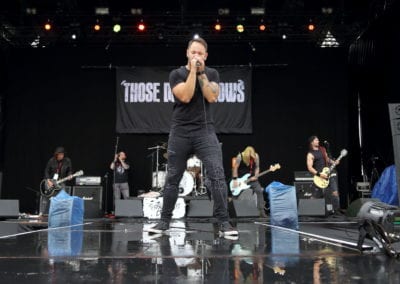 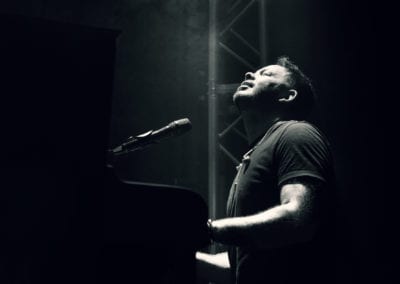 Those Damn Crows at The Dome, Tufnell Park, London 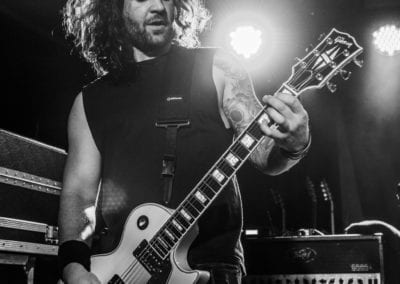 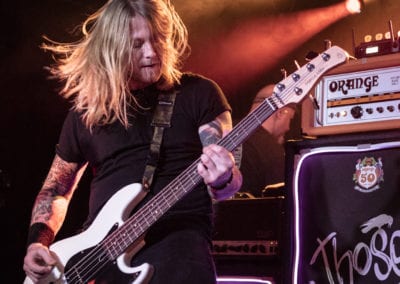 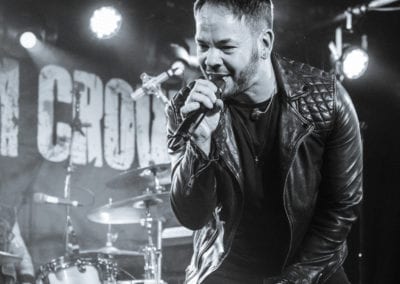 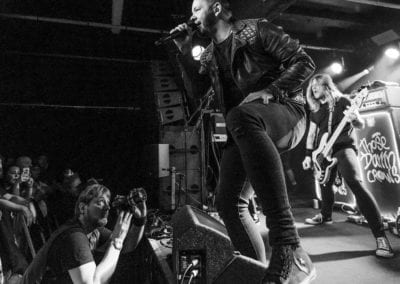 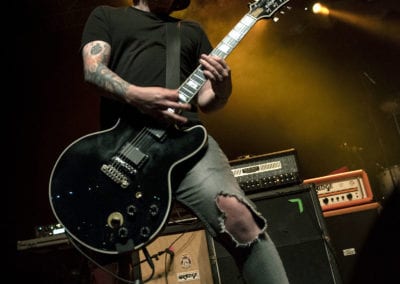 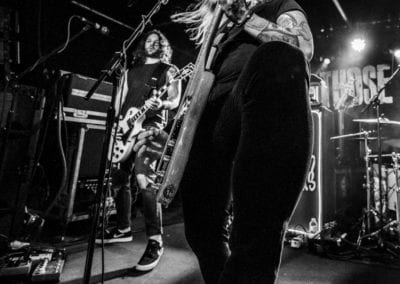 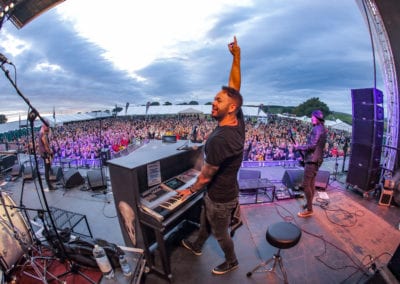