The Last Internationale were formed in New York in the late 2000’s, after founding members Edgy and Delila initially kept bumping into each other in a local coffee shop and realised that there was a musical connection.

They released their first EP in 2013, followed by their debut album ‘We Will Reign’ in 2014 with Epic Records. Their relationship with the label soon soured, leaving the pair high and dry.  No label, evicted from their apartment and broke, they’ve certainly had their share of hard times.  With determination and the spirit of ‘power to the people’, they decided to take matters into their own hands. With full creative freedom and their PledgeMusic campaign, in 2019 their personal album ‘Soul On Fire’ was born with help from friend Tom Morello and his label, Firebrand Records.

With their blend of socially aware, politically charged lyrics along with their hard-hitting blues rock sound, The Last Internationale are certainly a band to be both respected and admired.

I was lucky enough to see them in Nottingham in November 2019, at Rock City, when they toured with Rival Sons. As an energetic live band, they can certainly hold their own and despite whoever they open for, by the end of the set, they have the audience eating out of their hands, whilst recruiting new fans along the way. I was asked by one crowd member leaning over the front barrier into the pit, “what are these guys called again?” as she made a note on her phone.

‘Soul On Fire’ album executive producer Tom Morello (Rage Against The Machine, Audioslave, Prophets Of Rage)  says: “The Last Internationale are one of my favourites in the next wave of rebel rockers. They’re raw and real and mix East Village rock sensibilities with Battleship Potemkin firepower

How have you stayed creative in 2020?

By writing and playing a lot of music and reading. The recent protests in the US against police brutality gave us a shot of hope that inspired us creatively. We actually wrote and released a song about George Floyd and the movement for Black Lives Matter immediately after Floyd was murdered. We hate that such systemic brutality still exists today and can’t help but feel enraged. But with the current protests, all is not hopeless.

It was our first social distancing show. You can say it was a little strange seeing people so physically separated, but we were all united in love and energy.

You’re putting out some great content at the moment, have you enjoyed performing online during lockdown or do you find it harder without an audience?

We’re used to being engaged with our audience online and doing live streams. What is strange is that we aren’t out touring festivals this summer. We were supposed to play over 20 in Europe and even one in Mexico. So for now, we’re only doing online acoustic concerts and acoustic social distancing shows in Portugal and Spain.

Your songs are powerful, and often with a strong message. Who or what inspired you to create music?

The “message” part of it came naturally. We’ve always been pissed off and raging against authority since we were children. In high school, we started becoming conscious of the world around us and our awareness grew. For us, it’s called being a decent human being. Musicians choosing to be silent about the suffering and oppression of their fellow brothers and sisters is a morally reprehensible act that only produces more injustice and shitty art.

You’re cited as being “dangerous” and a big part of New York’s subculture, do you agree with this and how do you feel your music helps empower the listener?

Well, we are definitely “sub.” Dangerous? Yes. Not because we play rock music or plug our guitars into Marshall stacks. The danger is in the fact that we read, we have knowledge of self and our history, we are very vocal about politics in the way that our heroes were/are, and we do lots of benefits and support causes that are detrimental to the system. Any band that forms in their garage, even if they are only playing to 3 people, is dangerous if they believe they can change the world. The ruling elite are threatened by the average person taking a stand on something. They want their artists dumb and subservient to power. They prefer if we merely put on a facade of giving a shit, like participating in some innocuous campaign that changes nothing at all.

But music can and does empower the listener. As far as new artists are concerned, social movements are turning more to hip hop artists because rock as a culture isn’t speaking to anyone’s struggle anymore. There are enough rock artists, however, to make a difference and offer empowerment on a mass scale again if we learned to organize. The old generations and the new all getting together, organizing and supporting each other the way hip-hop artists do. We need more real community and organization and less posturing and empty slogans.

What do you consider the main differences between your American and European shows?

The U.S. is not as free as Europe. People there can’t drink until they are 21, virtually all of the venues deny entrance to people under 18 or 21, drinks are way overpriced for those who can drink, there are stiff city curfews, etc. On top of that, the arts are not supported like they are in many European countries. All these factors really have a negative impact not only on rock shows but on culture as a whole. So you can imagine half of our crowd not being allowed into a concert and the occasional “underage” fans that show up anyway to stand outside to try and catch some of the set every time someone else opens the door to leave or enter. This is a small part of the hypocrisy of US democracy.

During a live show, what are your thoughts on the ‘first three song and out’ rule for photographers?

All the good stuff happens at the end of the set. Many times we’ve asked, “where are the pics from the end of the set?” only to be told that the photographers were only allowed in the pit for 3 songs. Maybe it’s distracting to the audience having them there the whole time?

During this time are you conscious of the photographers in the pit?

No, never. We are focused on the music and the audience. I don’t think photographers would want us thinking about them while playing haha.

Photographs and videos are what documents a show. So yes, they are very important.

What has been your most memorable show?

So many. Nos Alive, Festa do Avante, Lollapalooza Argentina, opening for Neil Young, touring with Robert Plant, playing on stage with Adam Sandler, soloing on stage between Tom Morello and Wayne Kramer from MC5, headlining our first theatre shows, playing to our grandmothers…

We prefer they interact with us, but then become a fly on the wall when it’s time to shoot.

It is what it is. There are some cool videos on YouTube. In Paris, for example, someone filmed the full version of our song “Soul On Fire,” which we really liked. Then there are some that we hate. But overall, people are free to film if they want. It doesn’t bother us as long as they aren’t in the front row holding their phones up and ruining it for the people behind them.

Absolutely! That is why we own 2 film and 2 digital cameras.

We don’t really look for anything specific. If we like the picture, then we share it. Our favorite shots are usually the ones where we are interacting with each other.

From your perspective what are the advantages and disadvantages of the internet for any band?

Bands need to use the internet to their full advantage nowadays. We fought it for a long time and it hurt us in the long run. Now we have embraced it as a medium to interact with people and spread our music.

Probably Victor Jara or Zeca Afonso. It doesn’t get any more real than them.

From a bands perspective, what advice would you give for anyone looking to start out as a music photographer?

The artist will usually tell you what they want or what they are looking for. If you are a guest of the artist at a show or are hired to do a photoshoot, ask them if they want to see the pictures for approval. They might hate the pictures that you think are great, so don’t go and post them without their consent. Almost every photographer we hired has broken this rule. We’ve had at least 3 film directors publish music videos that we had turned down in the past. Only a few days ago a filmographer gave me his word that he would send me concert footage for approval. Sure enough, it was posted to YouTube in less than 48 hours. At that point, it’s too late to fix any audio problems or make any suggestions. In worse case scenarios, people will use your image in a way that goes against your values or to promote a cause or a product that you do not endorse. We’ve had to fight that many times.

Finally, what’s next for The Last Internationale?

We are getting back into the studio to record. We’ll also be doing heavy touring next year (2021) 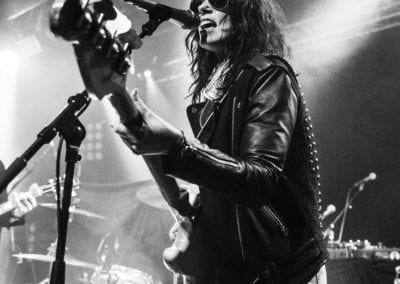 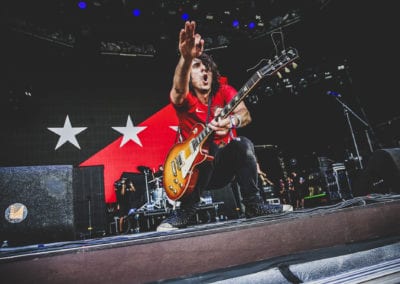 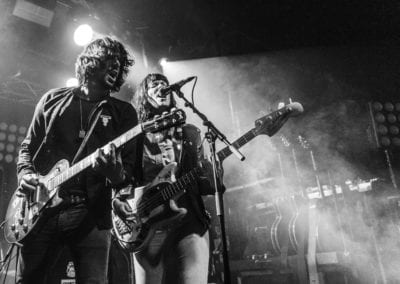 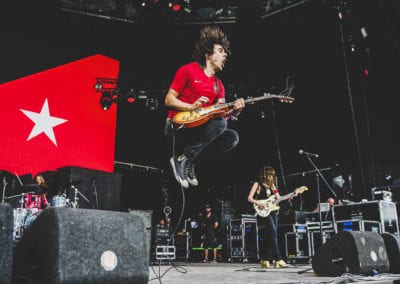 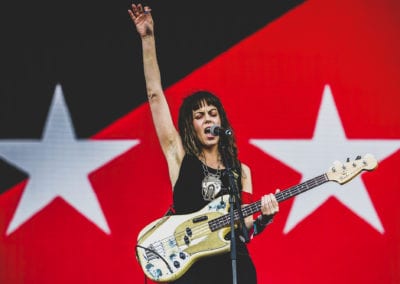 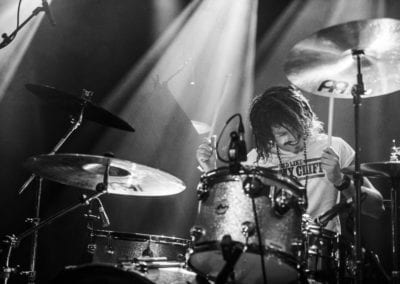 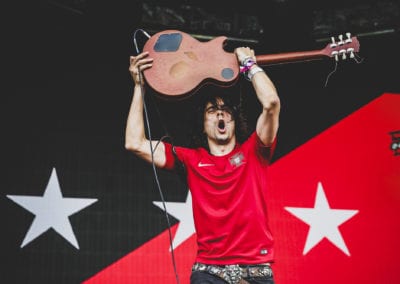 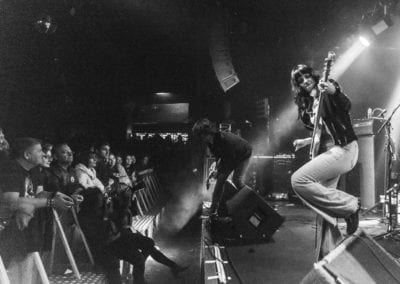 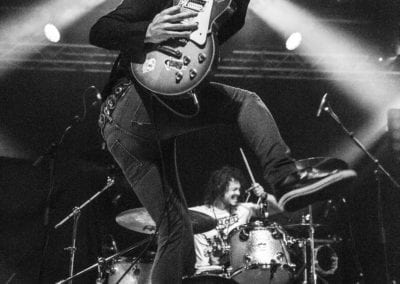 ← THOSE DAMN CROWS The Pigeon Detectives →