Danny Payne, a live music and portrait photographer from West Yorkshire. He’s been shooting live shows for over 10 years, covering events across the UK and Europe. Having previously been on the books of NME, impressively his work has also featured in Rolling Stone, Q, Kerrang!, Loud & Quiet, Rock Sound, Mixmag, The Fly and many other print and online publications.  Away from shooting shows, he’s often found enjoying gin/coffee/craft beer and “doing a poor job playing the guitar and looking for excuses not to take out his equally lazy dog for a walk” he says

I briefly met Danny whilst shooting the EMBRACE gig at The Piece Hall in Halifax. We were both on an AAA pass, although I only saw him in the pit, so I figured he must’ve been deep undercover for the rest of the show.  Naturally, I was interested to see the shots that he posted following the show. I was was really impressed, this led me to follow more of his work. Danny puts you right into the heart of the action, making you feel like you’re witnessing the moment, especially in his candid shots. he’s always in the right place at the right time and captured beautifully.

How did you get started in music photography?

I’m a music fan that became a photographer, rather than the other way round. I always used to take old disposable cameras to gigs in my teens and early twenties with the hope of getting a decent shot – I never did! When digital became a “thing”, the landscape changed for me quite a lot. Photography became more accessible, and eventually more affordable. I invested in a basic SLR (a Canon 350D) and continued to shoot the gigs I was attending to build up a portfolio, and I then spent months hounding small independent music magazines to let me shoot for them.

I can! Terrorvision at The Plug in Sheffield. I’d bought a ticket for the show, but in the months running up to the gig, I’d been introduced to Tony through a mutual friend who was playing keys in his other band at the time (Laika Dog). Tony – being the all round top bloke he is – sorted me a photo pass for the show. I’ll be honest, I felt massively out of my depth, and in hindsight, my shots were pretty awful, but I had the best time! That gig certainly gave me the bug for it.

What’s been your favourite gig to shoot so far?

This is a really tough one to call! I’ve had the pleasure of shooting some really special shows in the past – Biffy Clyro’s acoustic set at Headrow House, The Cribs at Millennium Square, or The Subways show in Manchester – the last show I shot! But if you held a gun to my head to pick ONE, it would have to be Frightened Rabbit performing in Glasgow a couple of years ago – the first show they performed together since frontman Scott Hutchison tragically passed away. It was a very emotional night, and the guys were joined by various friends – including Simon Neil from Biffy Clyro – to perform a small selection of F’Rabbit tracks. I’m a huge Frightened Rabbit fan, and Scott’s death hit me pretty hard, so to be at that show with all the other fans singing along was an incredible and emotional moment that I’ll never forget.

I tend to look for something different – I don’t tend to capture that many shots of people actually singing. I try to focus on the moments in between, the interludes, the glances, the smiles, just SOMETHING to try and make the shot stand out from just another shot of some person singing a song at a venue. There’s a real danger, particularly when you’ve shot a lot of shows, that your material starts to become formulaic, so I try to avoid getting the “standard” shots if I can.

What’s been the proudest moment of your photography career?

I had two shots appear on Saturday Kitchen once! Just kidding. I think getting approached by NME was certainly up there. I wasn’t expecting it, and to receive an email totally out of the blue asking if I’d be up for covering Yorkshire for them felt like a huge privilege at the time. Particularly as I’ve spent most of my photography career hounding magazines to let me shoot for them, but I never even thought of approaching the NME as, if I’m honest, I didn’t think I was at that level. I’ll never forget the day the contract dropped through my letterbox, and for a short while, I was on top of the world.

For an established publication like NME to contact you, that must’ve been amazing? What was the first gig you shot for them and did it change your approach?

I think my first show for The NME was Kurt Vile at The Brudenell. This was perhaps the perfect venue for me to start at, as I’d shot there plenty of times before and had an approach pretty much nailed. I’d been given a steer to use flash whenever I could, but thankfully I’ve always shot with flash at the Brud as the lighting can be quite tricky to work with anyway, so I was in familiar territory. It was also the first time I’d had a “shot list” to follow, which added a little bit of pressure, and the fact that this was a paid commission meant not getting the shots wasn’t an option.

I honestly don’t know. One thing I’ve frequently read is that establishing a ‘style’ is important, and the key to being successful. However, I’m quite insecure/indecisive, so committing to a “style” over the last ten years has been very difficult for me. In that respect, I guess I’d describe my style as “evolving”. I like to think my shots are pretty clean and honest – I’m not big on post processing (too lazy) and try to ensure that I always consider the balance of space in my shots. I’ve also started re-visiting old shots and re-processing them, to try and give the shots more character. Hopefully, when we’re allowed back in a pit again, I’ll have an established style that I’ll be happy with. We’ll see…

When I was cutting my teeth, I very much looked up to the successful guys from around Leeds – the likes of Tom Martin, Danny North, and Nick Pickles All three of these guys don’t shoot so much live stuff nowadays (Nick’s far too busy working for Twitter in San Francisco) but I think their live work was iconic around the time I was starting out (2010-12). I can pretty much guarantee that, if you were into music around that time, you’ll definitely have seen some of their work. Nick, in particular, was very supportive of me in my early days, which I’ll always be grateful for. Slightly further afield, Shirlaine Forrest from Manchester was also a big influence on me, too. She’s now a great friend who I’ve shot alongside 100s of times – her portfolio is incredible!

For portraiture, the biggest influence on me was Tom Oldham. I had the fortune of assisting Tom on a cover shoot for The Fly (RIP) years ago with Pulled Apart By Horses in Leeds, and I learnt a lot. I love Tom’s portrait style, how he balances ambient and artificial light so well. Serious skills! And he’s a crazy-nice bloke, too. Definitely one of the good guys!

How do you approach a shoot with no pit?

I’ll be honest, it makes me quite anxious. If a band is touring, I’ll happily drive 100+ miles to a different date where there’s a pit, if I can. Don’t get me wrong, I’ve shot plenty of shows from the crowd, and I do enjoy it, but there’s a lot of pressure. Obviously you can’t move around as much, so getting a decent spot early is key. But perhaps the biggest challenge, and the thing that I get the most anxious about, is intruding on the fans’ space. I’m overly aware that the people squashed either side of me haven’t parted with their hard earned cash to put up with my flash going off in their face (yes. I sometimes shoot flash. I’m not sorry.).

Things that many photographers have dealt with, including myself, are creative blocks or self-doubt.  Have you ever experienced this and how do you deal with it?

I know it’s cliched, but my journey as a photographer has been quite a roller coaster, like many others. Sadly, we don’t talk about the ‘downs’ enough, as we have an image, a face, or a brand we feel we need to maintain. If I’m honest, some of the lowest moments of my adult life have been as a result of music photography. Whilst I’ve enjoyed some amazing moments over the last ten years, the thing I’ve always struggled to cope with is the rejection – for example when you don’t get a response from an editor of a website or magazine, asking if they’d be interested in taking you on. I appreciate that this is part of life, but after a prolonged amount of time struggling to find new people to shoot for, it was hard not to start questioning myself: “Is my work not good enough? Am I no longer relevant? Is it just me? Should I call it a day?” It wasn’t until I attended a talk on Imposter Syndrome a few years ago that I started looking into how to cope with these feelings. The reality is that both the music industry and the music press are very different places to how they were when I started. I found the easiest way to adapt to the negative vibes I was feeling, was to put the camera down, and wait for the bug to come back, and If it didn’t? I’ve always prepared myself to look at new ways to be creative, think outside of the box.

If you could photograph any band, past or present, who would it be and why?

Crikey! There are a couple that spring to mind! I used to have a bucket list of bands I wanted to shoot, and I think the only band I have left on there is probably Rage Against The Machine. I’d love the chance to shoot Red Hot Chilli Peppers again now John Frusciante has returned, as I’ve never shot the ‘classic’ lineup. Thinking about past bands, the likes of Nirvana and Hendrix are the first ones I think of, but if I HAD to pick one, it would have to be David Bowie – such an iconic artist, with so much character on stage, and I believe his live shows were always pretty flamboyant. 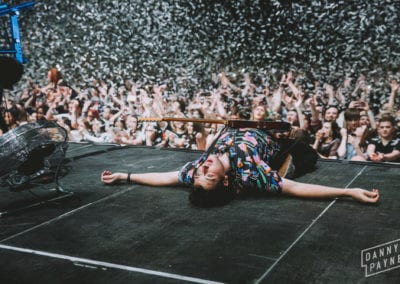 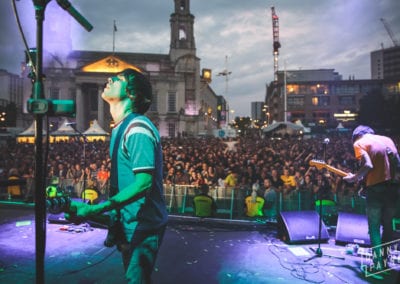 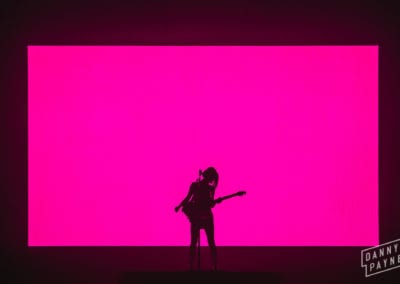 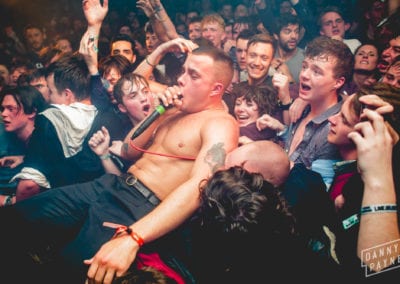 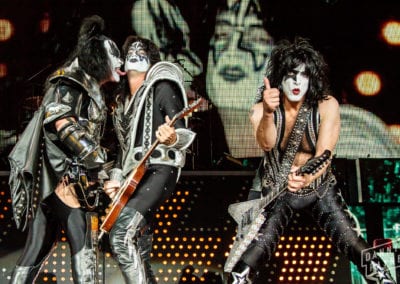 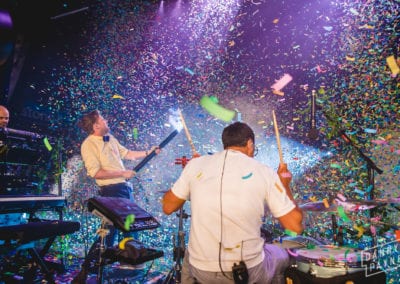 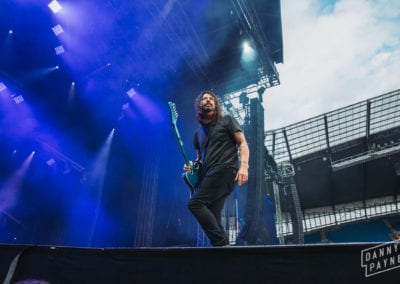 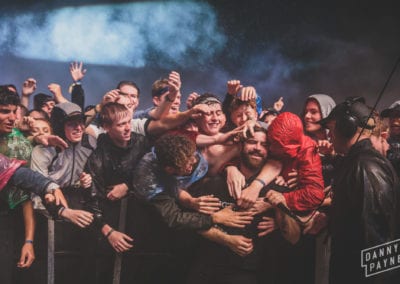 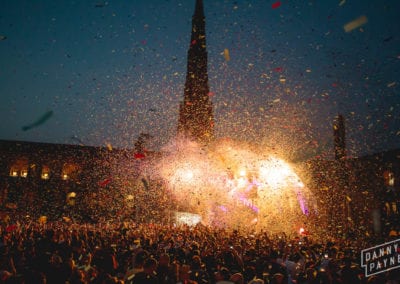 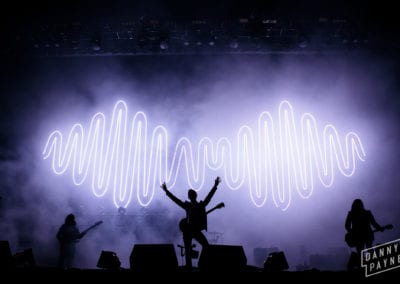