Olivia Johnston started her photography business within a year of leaving school in 2011.  Boldly going against advice that studying Geography at University would be her only sensible option, she knew that any path to pursue her ambition to be a professional photographer would have to be on her terms. She developed and learnt her skills working alongside other photographers, until finally, after photographing a friend’s wedding, she knew she was ready to set up on her own.

After beginning her career as a wedding photographer she soon branched out into commercial shoots, mostly in architecture and stonemasonry. This took her to locations all across the country, as well as an amazing commission from a world-leading architectural firm to do an exclusive shoot in New York.

Like many other music photographers, music has always been a huge part of her life, so when an offer was made for her to photograph shows for an online publication in 2015, she naturally jumped at the chance.  Since then, she has shot gigs in the UK, Europe and the US, from dive bars in Amsterdam, to the O2 Arena in London and even Glastonbury.   Bloody mindedness, a love for photography and music fills everything she does.  It has kept her on her toes, given her an edge and resulted in her working with some of her favourite rock and roll bands, such as Rival Sons, Lenny Kravitz, and Deep Purple . . . The dream.

I first came across Olivia in the pit at the Leeds O2, during a Rival Sons show. I didn’t get a chance to introduce myself as I didn’t know who she was at the time. Not one to shy away, I vividly remember her rocking a black and white striped trouser suit.

Olivia’s work has always intrigued me. I feel she’s able to capture the energy of any show performance, or the honesty of the artist in her backstage / candid work. There is something very classic about her shots, which really resonates with me.

First came my obsession with music, so I was into magazines like Kerrang! and plastered posters all over my walls as a teenager. I found photography soon after. It took a few years of experimenting with all kinds of photography before I started shooting gigs. I began with friends’ bands – this was actually a great learning curve because the venues were so small and the lighting so bad that you really had to focus on technique and it formed a solid foundation.

Yes, so well. I’d been shooting gigs for a couple of years, and some small festivals. For a while, I was reviewing gigs alongside other photographers when one day, last minute in 2015 I was asked to shoot Rival Sons at Rock City. I drove an hour to get to Nottingham, and as it was so hectic I was on the phone to their PR whilst at the box office. I managed to get the pass just as Rival Sons started their first song and had to fight through the sold out crowd with all my gear to get into the pit (I didn’t even know which side the entrance was on!).
Despite the years of gigs before that, this felt like the first official photo pass, because of the number of people who were relying on me to get those shots.

This is so hard to choose, I’m going to say Rival Sons at The Roundhouse. It’s such a spectacular venue, and their lighting engineer Nico from Showlab had created one of the best lighting designs I’ve ever photographed. They had a gospel choir waiting in the wings for the encore and the energy from the crowd was huge. I was buzzing off the energy in the venue and that feeling helped me find all the shots I was looking for.

I’ve always loved your work with Rival Sons. You’ve been lucky to tour with them in the past, how did that relationship develop?

Thank you! It’s been a long relationship, I’ve worked with them for several years. Over time we got to know each other and I’ve been able to photograph them in different countries and all around the UK. I had photographed them a few times and met them through a mutual friend, and that put a face to my photographs. It’s been a combination of them liking my work, trust, and an understanding of how each other works that have really developed the relationship.

I always have this question running through my mind when I’m shooting. It’s movement and dynamics. I want people who weren’t at the show to feel like they were, and to know how it felt. I look for interactions between band members or layering people on stage to get a better sense of the action. It’s easy enough to get a great shot of one person, but I want people to look back at this picture and understand the context of the photo, as well as a good looking picture.

Hmm wow. I have a few that were big moments for me at the time, and they keep developing. My proudest moments were all the firsts. The first AAA pass, the first tour, the first photo used on an album. I couldn’t pick one, because I was so proud of all those moments as my career developed.

Energetic and colourful. I hope people look at my photos and find them exciting! I like to embrace the colours of the stage lights, but using black and white to highlight movement can make a photo really dramatic.

I am so inspired by Tom Pullen and how he puts himself right in the action every time. Phoebe Fox has is amazing at connecting with her subjects. Matty Vogel makes every photo look like a dreamscape. Patrik Skoglöw manages to freeze time. Jake Owens has the most diverse use of colour and tone. Paul Nicklen shoots for national geographic, he inspires me to capture moments as they are, and to find art in the truth of the moment.

With determination and respect. It’s a fine balance between getting the shots you need, and understanding that people have paid to be there and queued to be at the front. If you know there’s no pit in advance, getting there early means you can stake out a spot. If not, I always try talking to the people around me, letting them know I’ll be gone after a couple of songs and that I’ll try to keep out of their way as much as possible.

Find what it is that excites you about live music and try to capture that. At the start, shoot everything, it will help you grow. And make personal connections – there are so many people wanting to shoot live music that ultimately it will be you that makes your work stand out. Lots of people can take a great picture, but being someone that’s great to work with is another skill.

in your ‘Top 10’, you mention ‘The Chrysalis Project’ can you tell me about that?

I saw a picture by the late Andre Mittwollen and it struck a chord with a question I’d had for a long time – ‘How does being on stage change an artists’ energy? From the tentative final moments before a show to the rush afterwards.’

It is a completely documentary project, photographing bands and artists naturally, going through their routines and seeing all the different responses to performing.
It’s been fascinating, the range of emotions I’ve seen – elation, nerves, excitement, tiredness, frustration, you name it!

I have primarily been focused on rock, metal and blues bands, so I’m looking to expand this into other genres next.

I was having a tough time choosing and I’ve just got it. My Dad’s band! He was in a 6 piece folk-pop band in the 60s-70s called Design. They were all over TV so I’ve seen photos and footage, but to see him sing and play guitar or piano would be so fun. And to photograph him do it? Wild!

The Picturebooks at Brixton Academy. I had about 2 minutes to get the shot, whilst trying to call out directions to the lighting tech and the band.

Nothing More, only a couple of weeks before they went to the Grammys. The pit was barely big enough to stand in for this one, I feel lucky to have been in the right place for this moment.

Lenny Kravitz. Lenny Kravitz!
This was a hectic shoot – only one song in the pit then we were escorted (through the crowd) to the FOH for the next two songs, but it took a while to get there.

Monster Truck, shot for my series called The Chrysalis Project. This was immediately after they came off stage. I had taken one in the same set up before the show, and I love this post-show shot seeing their happiness and exhaustion.

Rival Sons at Brixton Academy. This is what I mean by layering – it gives a better idea of what’s happening. I love the concentration on Jay’s face.

Lower Than Atlantis. The amps had just blown so Mike jumped down into the crowd to play some songs acoustically while they were fixed. I was lucky anticipating what might happen when I saw him unplug, as I had been by the stage.

Monster Truck at First Direct Arena in Leeds. I shoot with these guys a lot but it was great to have free reign of such a big stage, plus the lighting was really dramatic.

Airbourne at Ramblin Man Fair. I had AAA for the weekend and made the most of it by getting some shots of their ‘grand finale’ on the main stage.

Inglorious. I was so happy when I downloaded these shots and saw I had all 3 guys in movement in one frame.

Rival Sons at The Roundhouse. This was one of my favourite ever gigs to shoot, and this picture encapsulates how it felt. 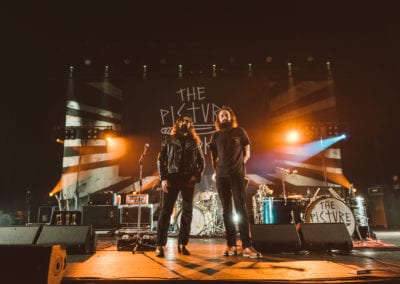 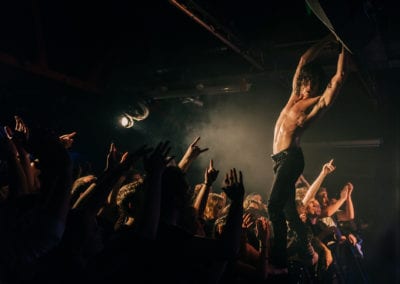 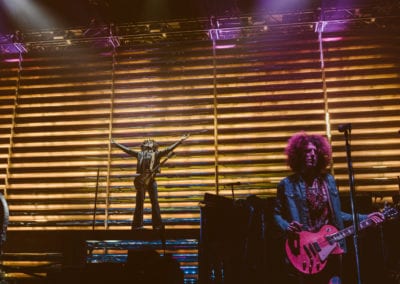 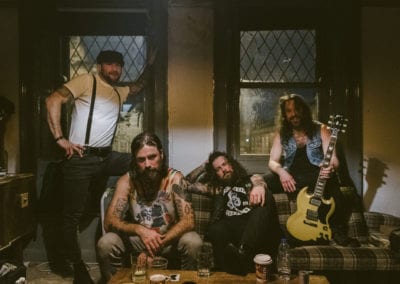 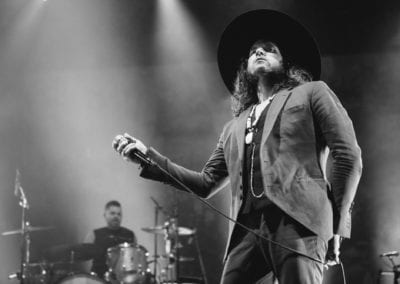 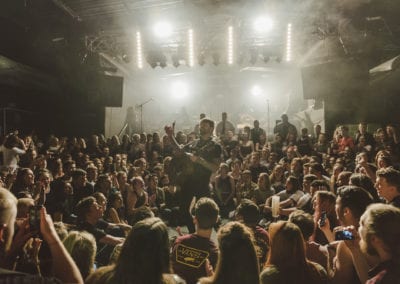 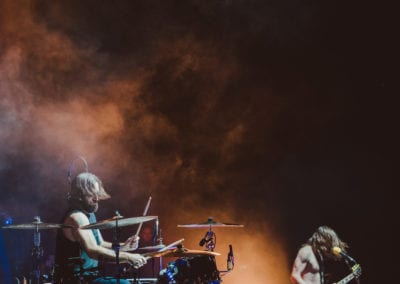 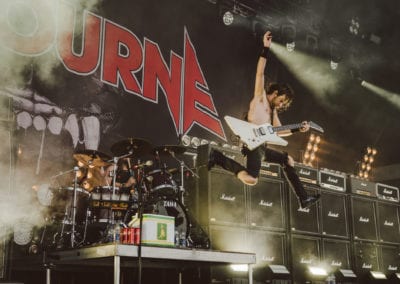 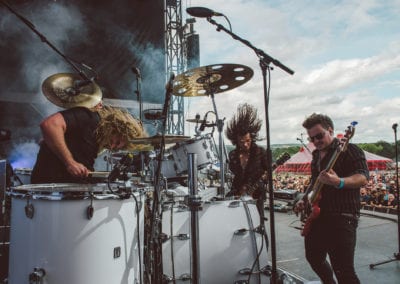 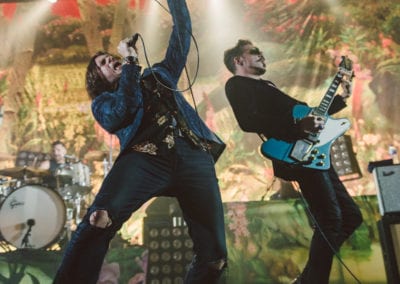