Andy Gallagher is completely self-taught, he was a latecomer to professional photography, not taking it up full time until he was 37 when he set up his own wedding, portrait and events photography business.  It was five years later that his attention turned to live music and he was able to realise a life long ambition of shooting for Kerrang! Magazine. Andy also shoots live news stories for agencies, freelances as a product photographer for one of the UK’s largest retailers, lectures, mentors other photographers and “eats an excessive amount of Snickers”. His work has been published around the globe and in every national newspaper in the UK but “shooting Iron Maiden for Kerrang! is what it was all about” for him.

Personally, Andys work speaks for itself.  Every image boldly ‘pops’ with vibrance and clarity, creating an instant connection between the viewer and the subject, especially during those shots with the artist staring straight down the barrel of the lens. I wanted to find out more about Andy, here’s what he had to say…

I can distinctly remember the first time I saw Iron Maiden’s Live After Death sleeves as a 14 year old at my friend’s house in Portsmouth. Yes, the iconic cover art was incredible but the sleeves were covered in what felt like hundreds of incredible photos of the band. I was transfixed and remember thinking how cool a job it would be to take photos like that. Around the same time, I discovered Kerrang! magazine and photo after photo of the bands I loved. I bought the mag religiously, purely to look at the photos. My bedroom walls were covered in posters and magazine cutouts of pretty much every rock/metal band of the time. When teenage me was asked what my ambition was I always replied: “to have Kerrang! magazine use one of my photos of Iron Maiden as a poster”.

So obviously I left school and went to work in a bank! Several career changes later I finally set up my own portraits, weddings and events photo studio in 2008. My love of rock/metal music had not dwindled and was still a regular concert/festival goer.

The big moment came in 2011. I’d taken my then 9 year old daughter to Download for the day on the Friday. Halfway through the day she noticed the photographers and turned to me and said “Daddy, why don’t you do that?”, I told her I’d wanted to when I was younger and she reminded me that I was always telling her she could do anything she wanted if she tried hard enough. As soon as I got home that night I started contacting small venues around the area and talked my way into enough gigs to get a decent variety of photos for a portfolio. Two months later I had a main stage pass and was shooting Motorhead, W.A.S.P. and Immortal headlining Bloodstock Open Air.

At every gig, I still find it slightly ridiculous that I am able to do this.  There are so many gigs that were, you know, proper pinch myself moments. AC/DC at Hampden Park, first time shooting Iron Maiden at Sonisphere, KISS, Metallica, Roger Waters, The Rolling Stones all stand out, and being on stage with Judas Priest at Donington was a pretty insane moment. My favourite though was Iron Maiden’s Legacy of the Beast tour in Birmingham a couple of years ago. Everything about it was perfect. I was commissioned by Kerrang! and I arranged permission to shoot the whole show with the band’s management, always a bonus. The production was on a completely different level, the show was visually stunning and the fact it was Bruce Dickinson’s 60th birthday added to the ‘special night’ feeling. The band’s performance was phenomenal, probably the best I’d ever seen them in over 30 odd years of seeing them live. I will be eternally grateful that I had the opportunity to shoot this show.

In a word, posters. I don’t want to come away with a set of photos that work together to ‘cover’ the show. You know, the here’s the singer, here’s the guitarist, here’s everyone type of shots that you see everywhere. Instagram, blogs and, increasingly, magazines are awash with them. Individually, each of those photos invariably cause no emotional response, lack soul and are, well, just boring. I challenge myself to leave with a series of unique, able to stand on their own photos, ones that I’d want to put up as a poster on my wall.

That Iron Maiden gig a couple of years ago led to the fulfilment of a 30 odd year ambition, to have Kerrang! magazine use one of my photos of Iron Maiden as a poster. It’s also given me renewed vigour when telling my, now 18 years old, daughter that she can do anything she wants, much to her annoyance. She was much more impressed when, last year, one of my shots of Post Malone was used in the US to head up that week’s Billboard Hot 100. I’m not gonna’ lie, I was pretty chuffed with that one too.
(See both these images in the gallery below)

How did you first come to shoot for Kerrang!? Did you contact them or did they call you?

I contacted them. They were obviously going to be receiving a lot of similar approaches so I knew I had to stand out. I ran my own photography business so I was in a position to be completely flexible.  I was prepared to drive any distance at extremely short notice and deliver the photos that same night. I set out from the start to get a varied portfolio of unique shots. The purpose of this wasn’t “look at who I’ve shot” but “look how adaptable I am”.  I sent a brief introductory email with three photos, it was enough for them to ask to see more. Obviously I got lucky on the day I sent the email, a right time right place kind of thing, but I’d maximised my chances.

I gamble, hard. It’s well researched, but,  I will risk missing out on literally everything else to get THE shot. The ONE shot that, to me, captures the essence of the gig. Sure, when commissioned I will usually get the standard, boring set of photos brief, but I will risk getting all of those in maybe less than one minute of one song so I can dedicate the other 14 minutes to getting THE shot.  It takes discipline not to follow what every other photographer is doing, perhaps it’s a discipline I’ve learned through running my own portrait studio. Most people will spend a few pounds on a set of 10 x 8 prints where they think they look good, but everyone takes out a second mortgage to buy a 30 x 20 framed print of that one killer shot where they look amazing.

Your gamble always pays off, you’re always in the right place at the right time!

Anticipation and taking control of what I can.  I’m not gambling on something completely random happening just in front of me, I’m anticipating that something specific will happen so I’m prepared for it, and not just reacting in an instant.

I’ll use a wedding as an example to better explain what I mean. If you were to shoot a wedding, there will inevitably be the first kiss moment. Let’s say the couple have told you that this is the most important shot for them. Not only do you KNOW it is going to happen, but you also pretty much know WHEN that will be. There is no gamble here. It is going to happen at a pretty specific time and it is important to your clients. To not get that shot for the couple would be inexcusable.

At a gig, I don’t know when, or even if my anticipated moment will occur, hence the gamble. I challenge myself the same as that first KISS scenario. To me, if I did not capture that anticipated shot, then that would be just as inexcusable.

I’ve talked about these anticipated moments as singular events per gig, but obviously, just like the first kiss isn’t the only shot at a wedding, I’m anticipating a number of shots for every gig I shoot. There is so much I can’t control at a gig such as the lighting and positioning of the artist, but I can decide what I want to shoot.

In general, it is Helmut Newton, an absolute master of compelling composition with an extraordinary body of work, each image a ‘poster’ in its own right that you’ll find yourself unable to take your eyes away from. It would be impossible not to mention Ross Halfin as it was his photos on the Live After Death sleeves and booklet, and probably a lot of the posters on my wall, that sparked my ambition back in ’85.  In my opinion, Katja Ogrin is the stand out live music photographer today. Katja’s eye for composition is exceptional and her work ethic is fantastic.  She will find that shot and she will get it.

It’s highly likely that I’ll know before I get there that it’s a no barrier show, so long as you respect the audience then in all reality, it doesn’t really change much, just that I’m going to have to work a little harder to get the shots I want.  Three things I go out of my way to ensure are that I don’t piss anyone off, don’t hit anyone on the head with my gear and don’t drop it!

I know many have a different view on this but, as with all photography, concentrate on composition not on getting the technical stuff right. A compelling, unique photo with noise and blown out highlights beats the same old boring but technically perfect shots every single time. Make your sole aim to get ONE amazing unique shot per gig. Research the band in advance, look for photos of the current tour, are there any fan shot videos you can study? Identify BEFORE you go to the gig what that ONE shot that you are going to get is.

Do not stand anywhere near where the gaggle of other photographers are, you are only going to get the same shot as everyone else and you are not going to get something unique and, you will definitely not get that ONE awesome shot that you’ve planned to get.  You are going to have to gamble to get it, take the chance that it will happen, position yourself accordingly and hold your nerve. Do this 12 times and you will have an extraordinary, unique portfolio that is going to get you on to the next level. This is precisely how I got onto the books at Kerrang! magazine.  I was not asked what camera or lens I use, and I was definitely not asked what settings I use! Shoot what you want, how you want, but do not shoot boring.

Depeche Mode are definitely up there, Dave Gahan is such an intensely emotional performer and I’d love the challenge of capturing that in a still. I suppose if it could be anyone at any time then it would be Van Halen back in the early ’80s, just the epitome of showmanship, what a laugh that would have been to shoot! 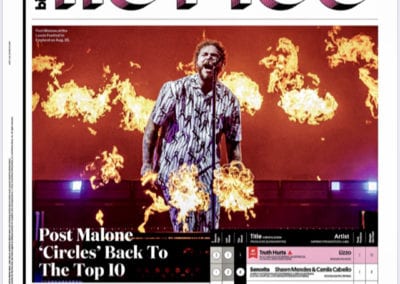 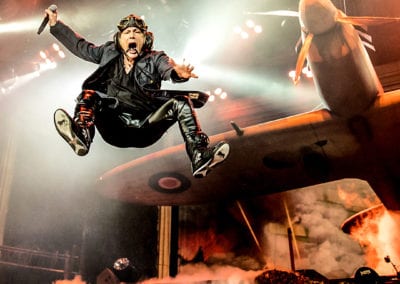 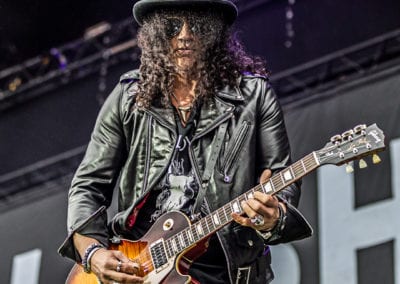 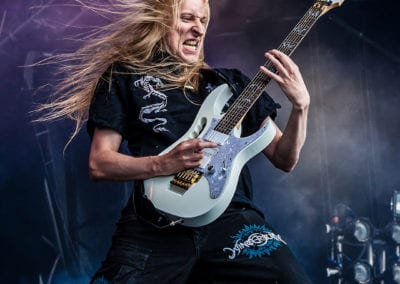 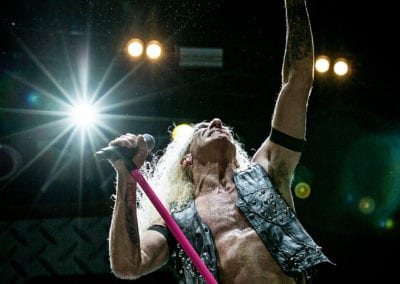 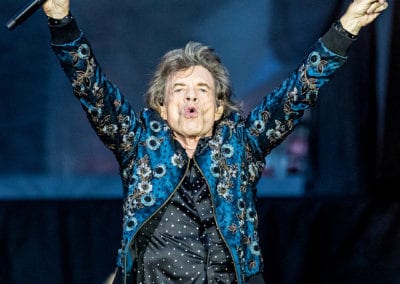 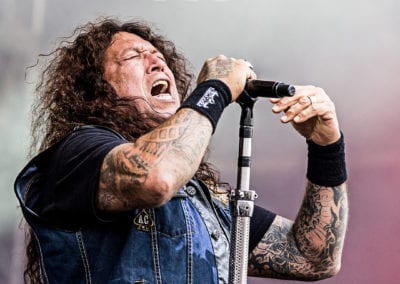 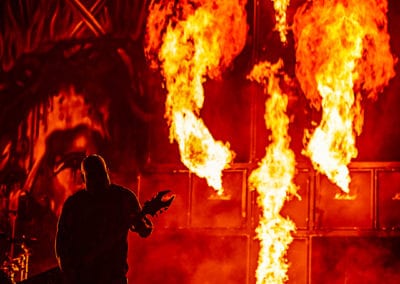 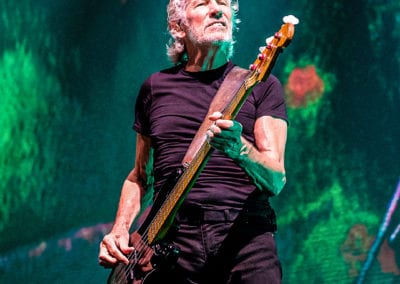 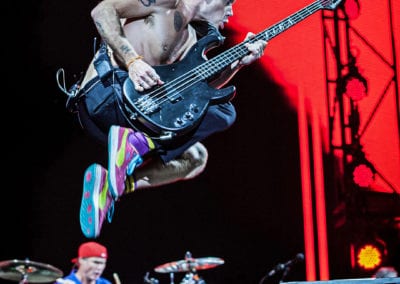 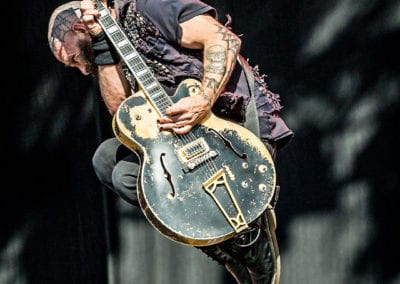 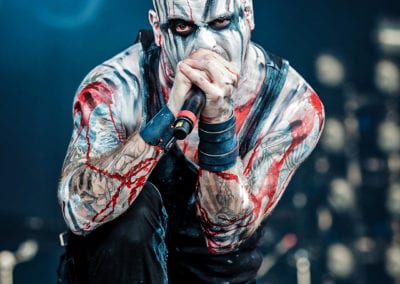 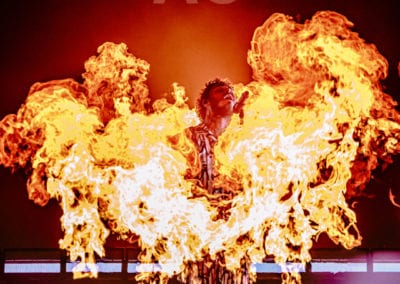 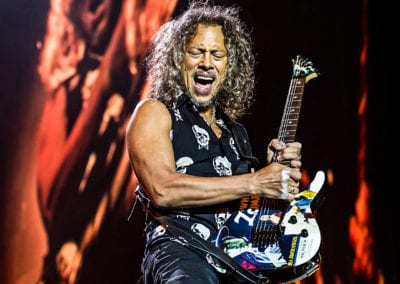 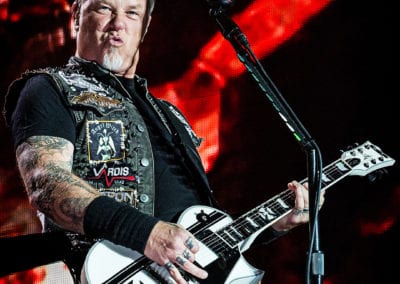 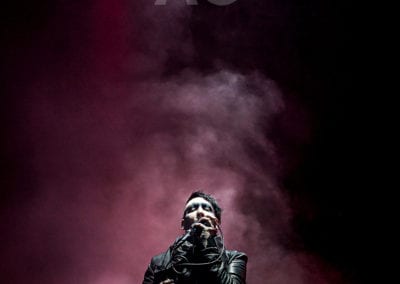 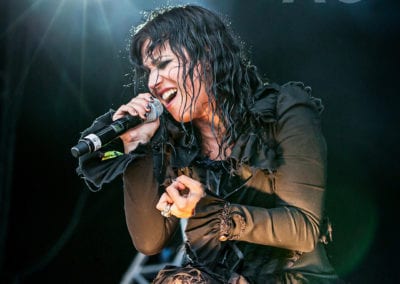 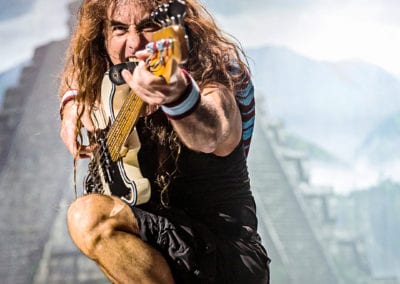 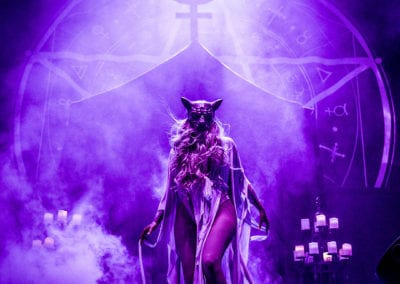