Embrace were formed in West Yorkshire, England, in 1990 by brothers Danny and Richard McNamara.

The band recently announced, to the delight of their fans, that they’re working on their eighth album. “To say we’ve been looking forward to getting together would be the understatement of the century. We’ve got so much pent up artistic energy, it’s almost impossible to contain it. It’s been a long time, but we hope the wait has been worth it. It really does feel like a collection of songs to rival any album we’ve ever made.” says Danny

With an impressive UK and international tour history and many festival appearances, including playing the main stage at Glastonbury in 2000, opening for headliner David Bowie.   Embrace performing live is where they really connect with their loyal fanbase, it’s been heard for the crowd to occasionally overpower Danny’s vocals whilst interacting and singing along.  Every Embrace gig is like a party with ‘one big family’.  I’ve been lucky to photograph the band three times, including their homecoming show at the Piece Hall in Halifax in 2019, and their show at the first direct Arena in Leeds, right before the pandemic hit the country in March 2020.  Like the gift that keeps on giving, I was finding bits of confetti hidden within my gear for weeks after, serving as a reminder of another great gig.

I was finally able to catch up with both Rick and Steve for this encore edition of Behind The Lens.

Hit play, and read what they had to say.

You’ve just announced that you’re working on your eighth studio album, congratulations!  Is there anything you can tell us about?

Steve – During lockdown we’ve all been sending Danny pieces of music we’ve written hoping to inspire him into writing an Embrace classic. He says he’s got loads of fantastic ideas and Rick will have too, but he plays his cards closer to his chest. It’s early days and the band are just starting to get back together with the aim of releasing an album in early 2022.

Rick – It’s been a really unusual process in that it’s been so remote.  I’m yet to hear what Danny has conjured up with the ideas that we’ve been sending over, but im still feeling the same excitement that I always feel at this stage … it still feels like it’s all to play for… I don’t think that ever goes away!

What’s your creative process when it comes to writing / producing new material?

Steve – Danny either bangs away on an acoustic guitar or piano or sings over music written by the band members. He then brings a rough version to the band for us to jam within the studio. Rick usually brings an almost finished version of his songs to the band, where we usually jam to try and improve it.

I’m a lover of reportage photography.  Would the band ever consider taking a photographer into the recording studio?

Rick – We have done that before with Mary Scanlon but she was such a close friend that it felt completely natural, nowadays I think we’d be too self conscious … we’ve all got beer bellies Ha!

Steve – Studio days are usually long and boring. So for a photographer, it’s mainly band members sat on a sofa or an engineer on a computer.  Saying that, it would be good to document the next album, what we need is a photogenic studio.

I’ve always been intrigued by the album cover for ‘The Good Will Out’.  Where was that taken?  Can you remember how that shot came together?

Steve – I think Danny wanted sunshine, I don’t know why New York was mentioned, probably to get away from the Britpop obsession with Camden and London.

Rick – We were on Christopher street in NYC, Mary had scoped out the location and we went down at sunset to try and create an image that Danny had in his head which didn’t quite pan out but the resulting image was so strong we had to go with it, I remember there being one taken a second later where you could see both his arms but we went for the on with the most swagger … it was the 90s after all.

Amazingly, It’s been 23 years since the release of your debut album TGWO and you still continue moving forwards.  You must have so many career highlights, especially being the penultimate band to play the Pyramid stage at Glastonbury when David Bowie headlined in 2000.  Can you remember anything from that day?

Steve – For me, it was the scariest thing we’ve ever done. I’d been to Glastonbury as a punter twice in the ’80s, (I’d even snuck in for free once) so it seemed a bit unbelievable to be playing there. Also, I was always a massive Happy Mondays fan and we were going on after them which was a big pressure. Supporting Bowie was mind blowing as I’d grown up listening to him as well. It was too stressful to enjoy the gig for me, I was just so pleased we did ourselves proud; one of my best mates always says it was his favourite ever gig and if we were crap he would have said so over the last 20 years!

Rick – I remember Steve asking him (Bowie) for his autograph and him being not very forthcoming, probably shitting himself about the headline slot … it is a scary one.

Apart from Glastonbury, what other memorable shows have you played?   Surely The Piece Hall in Halifax has to be up there?

Rick – Oh yeah especially as I didn’t think we’d sell it out in a million years but ya know… we did!  One of the best days of my life!

Steve – Being from Halifax I was immensely proud of the whole day, the weather was perfect, the Piece Hall has finally realised its potential after all these years and making Halifax into a cool town thanks to European funding.

Do you still get nervous before a show? Does the band have any rituals before taking to the stage?

Rick – Not really it’s kind of a zone you get into which might be anxiety but it’s probably excitement as well… We have a huddle before we go on … and a piss!

Steve – Sometimes yes and sometimes no, and it’s nothing to do with the size of the gig, it just random. The main band ritual is to have a band hug and jump up and down before we walk on stage. My main ritual seems to be getting the tightness of my shoelaces just right

During ‘Lockdown’ you performed two online shows. How did these compare to performing before a live audience?

Steve – It was surprisingly nerve wracking mainly due to the technology involved as we do it all ourselves and we are not exactly experts. I watched it when I got home and thought it was one of the best sounding things we’ve ever done.

Steve – Since we started doing Patreon and we’ve been going through our archive it’s become important. There’s loads of stuff from our history that isn’t documented or just has a couple of band snaps. A quality photograph means a hell of a lot to the band as it captures a moment or makes the band look cool and can become iconic.

What are your thoughts on the ‘first three and out’ rule for photographers during your set?

Rick – If it’s a massive squad of flashes going off then I get it, but if it’s just one or two then I don’t see the problem with them hanging around as long as there’s a mutual understanding that looking like a sweaty mess isn’t really a good look

Steve – Never really questioned it, to be honest, it can be off putting if you notice the photographers. It would probably work better if it was later in the set or for the encore as everyone is more relaxed

When publishing or sharing shots online, what do you look for in a shot?

Rick – Capturing the vibe… and making us look young and thin obviously!

Steve – Something that makes the band look good and ideally something artistic either in composition or lighting or action. I suppose everyone wants Londons Calling by The Clash.

Rick – One amazing one…

Steve – I understand people taking photos or filming a favourite song, done it many times myself, but watching the entire gig through a phone is crazy.

Do you prefer your photographer to get involved in the action or keep their distance whilst behind the scenes or on tour?

Rick – Probably keep some distance, to be honest, we’re quite private and like to do our thing before shows.

For anyone shooting your show for the first time, what can they expect

Rick – Well, we’re 5 noshes so it’s a cakewalk obviously…. lots of audience participation lots of songs you didn’t realise were us.

You all have individual projects outside of the band, but what’s the best thing about being in Embrace?

Steve – The Fall, The Ohsees and Grandaddy’s reworking of the Sophtware Slump on piano.

Finally, what’s next for Embrace?

Steve – Hopefully, we will get to do some festivals this year in between working on Album 8, then touring it as much as possible next year

Rick – yeah, got a few festivals coming up and starting recording sessions which are going to be different because the studio I’ve got set up at the moment is totally new but amazing… I’m really excited about it… Can’t wait to make us sound fuckin’ massive!! 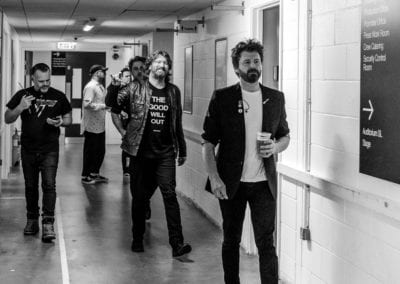 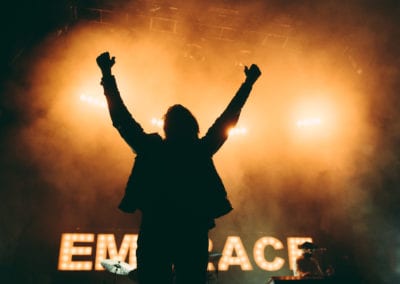 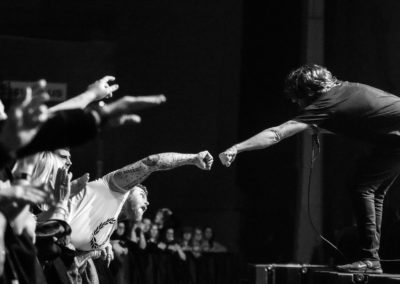 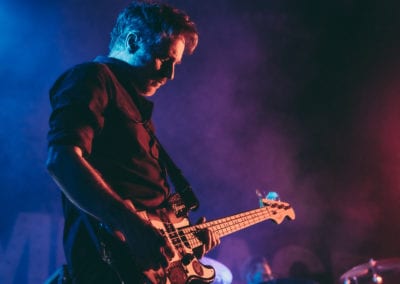 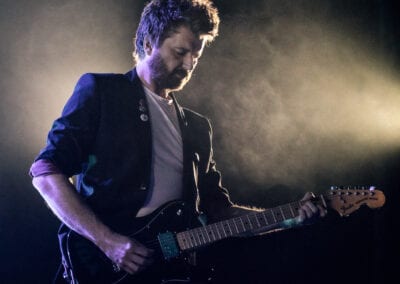 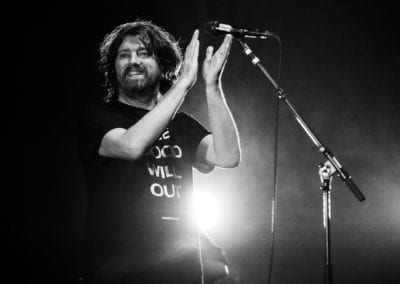 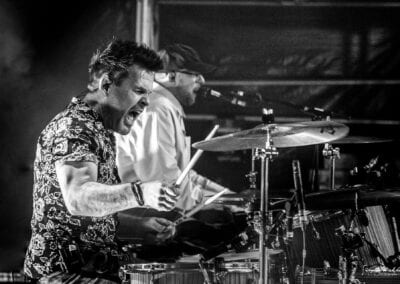 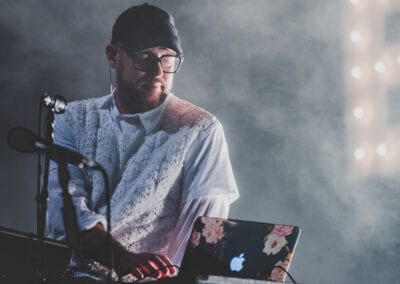 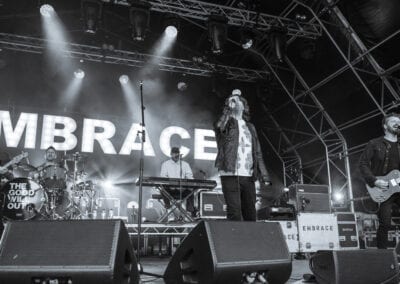 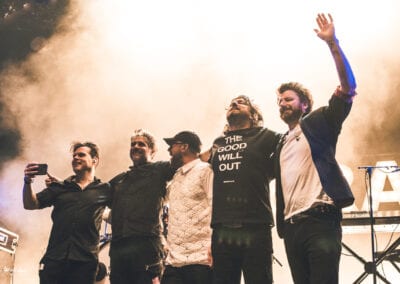 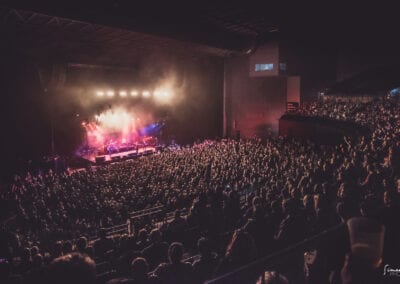 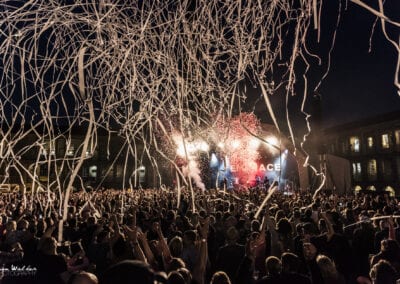