The band spent much of their early years touring extensively – they first played the Download Festival in 2010, and have toured as support act to Slash, Shinedown, Terrorvision, Skunk Anansie, Eagles of Death Metal, The View, Ash, Feeder, Queens Of The Stone Age and We Are Scientists, as well as playing their own headline gigs throughout UK, Europe, US and Japan.

With three studio albums currently under their belt, The Virginmarys have staked their claim on the music scene with their social commentary, edgy riffs and along with a growing global fanbase, they continue to restore the faith in music.

I was first introduced to the band when they performed at the Parsh in Huddersfield, it was loud, raw, I was hooked. They’ve regularly featured on my playlist since.  I was genuinely excited when they agreed to collaborate with Behind the Lens.

How have you been spending the last 12 months with everything that’s going on?  Have you found that it has sparked your creativity?

Ally: Good question, It kind of feels like a blur in many ways.

I’ve just been making the most of it, learning new stuff and practising a lot of patience. I feel very lucky that we have vast amounts available to us at our fingertips and can learn so much for free. In some ways I think this ‘forced stop’ will turn out to be a good thing in breathing fresh air into the process and output, it’s certainly made me come at stuff from a different angle.

Who or what inspired you to create music?

Ally: My Dad playing records since I can remember. I’d be going to sleep with The Beatles records playing by my bedside.

The bands playing in the house were the likes of The Beatles, Pink Floyd, Lynyrd Skynyrd, Neil Young, Allman Brothers, Free…that type of thing.

From the age of 11, I started playing guitar, then writing when I was about 15 onwards. Punk music played a big part in my first writing experiences, and the whole DIY ethic of the punk movement still inspires me to this day.

Music is the most beautiful thing i‘ve found and I guess I want to honour that.

Your songs can be sometimes controversial when dealing with issues within society. Do you enjoy pushing boundaries?

Ally: I think as an artist it’s your duty to push the boundaries, otherwise you’re a tribute act. You should be bringing your personality and passion to the table.

As for society, that stuff writes itself, I’ve found it almost impossible in the last decade not to be speaking out.

I know a lot of people shy away from writing about their views in fear of decreasing their popularity or alienating the fans but I can only be honest about how I feel, and the most important thing to me, is being able to deliver the words with conviction, I can’t sing about something that means nothing to me in the same way that I can ‘spit out’ words that mean something to me. I believe it’s an important part of the band, and adds depth to the music.

I don’t go into writing trying to create something that’s always ‘comfortable’ to the listener, I want it to challenge.

What is your creative process when it comes to producing material?

Ally: It’s changed as the years have gone on, there is a time and a place for most processes.

What we’ve found working great recently is that I create a demo of the song and general vibe, send it to Dan so he has the general idea in his head by the time we’re in the practice room. It can be difficult to start playing a song or riff and expect the other person to be on the same page as you from the off unless it’s completely fresh and been developed and written within that particular session.

Danny, I’ve never seen anyone attack a drum kit the way you do! Does the music you produce add to the aggression or is that simply your style?  Who are your drummer influences?

Danny: It’s definitely something that has developed over the years I think. I only ever had lessons for the first year or so and really just picked up the basic rudiments but it was enough for me to understand how drums work. From there any time I was at a show or saw anyone play something live that I’d never seen before I’d be home practising and working it out until I could play it well. I know very early on I made up my mind that I wanted to have my own style rather than be technically great so I think I probably consciously and or subconsciously tried to do the opposite of what other drummers I saw were doing? I’d say my influences would have to be Mitch Mitchell, Keith Moon and Karen Carpenter.

Some of your music has been produced and mixed by big names such as Toby Jepson and Mike Frazer. Your 2016 album ‘Divides’ was produced by Gil Norton, at the legendary Rockfield Studios. That must’ve been mind blowing experience, what was the biggest thing you took from the process?

Ally: We’ve been very lucky with who we’ve been able to work with in the past.

As you say, working with Gil at Rockfield Studios was incredible, it felt as big as it gets,’ and an honour to be working with someone who produced some of your favourite records. He’s a great guy and we’ve stayed friends since.

I’m always trying to learn from each experience and keep developing as a musician, writer and most lately producer. Experiences like what we’ve been lucky enough to have, have been priceless.

Did you learn anything new about yourself as a band from that point on?

Ally: It was a strange time for the band around then, things were going on behind the scenes, and though undeniably great stuff was happening, it wasn’t the happiest time of our career. Matt left a year of so later, and the label we’d been signed to folded.

2017 was a very big transitioning stage.

Would you consider taking a photographer into the studio with you?

Ally: Yeah, totally so long as we felt comfortable with them.

You’ve spent a lot of time touring the United States, how is the U.S crowd and tour experience compared to the back home in the UK?

Crowds can vary around different parts of the UK, and they can change from year to year I find. I think a lot has to do with the vibe you’re creating on stage as a band that night.

You’ve toured with and supported some major names in music. When you toured with Skunk Anansie in 2010, you were quoted as saying ‘it was a major learning curve’, what did you mean by that?

Ally: It was the biggest run of shows we’d ever played, both in the size of the venues and the length of the tour. It was massive for us, a completely new experience, and a chance to step up.

Skunk Anansie, were amazing to us, we have a lot of respect for those guys and the crew we were around. They really liked us luckily and gave us a lot of support.

We got to learn the mechanics of it all.

Ally: They’re definitely an important part of our show, certainly in getting your name and image out there, I think it helps a hell of a lot.

At a gig, what are your thoughts on the first three and out’ rule for photographers?

Ally: To be honest, I wouldn’t mind if they did double, another 3 songs further on in the set. I’m not sure I feel the first 3 songs capture the set. I think it’s more reflective later on in the set where there’s some sweat.

I can’t say I’ve ever felt its affected the show.

I guess I’d be more concerned with whether it affects the crowds experience and those on the front row.

Ally: I’m conscious of them, but unless they’re particularly intrusive I can’t say it really bothers me.

Ally: Something that looks exciting and captures the energy of the band live.

Ally: When people video you from start to finish, that does put me off a little.

I think it adds to the pressure not to fuck up and takes your mind off the show and what you’re doing.

When on tour or on an AAA pass, do you like your photographers to get involved in the action or keep their distance whilst behind the scenes?

Ally: It depends who they are, we have close friends that we’ve given AAAs to and I think it’s cool to get involved here and there.

With them being friends though, they already guess what we’d be alright with and when to come in and out.

Ally: Just comes down to respect, I would say we’re amongst the easiest people to get on with and always looking to help out anyone when we can, but that respect has to be reciprocal, we’ve been in it for too long to suffer fools gladly.

For anyone shooting your show for the first time, what can they expect?

Ally: As I write this I’m listening to Kill’ Em All – Metallica

I’ve recently been listening to ‘DC Hardcore bands of the ’80s, 90s, revisiting stuff I used to listen to years back.

What’s next for The Virginmarys?

We’re really excited to get the new stuff out there. 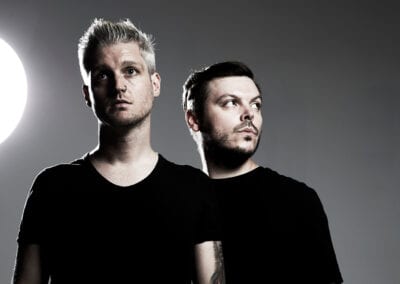 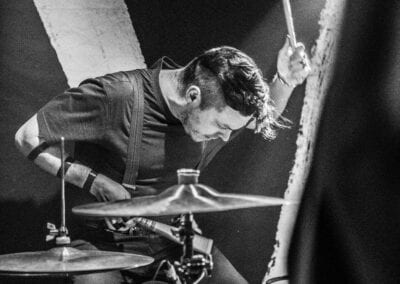 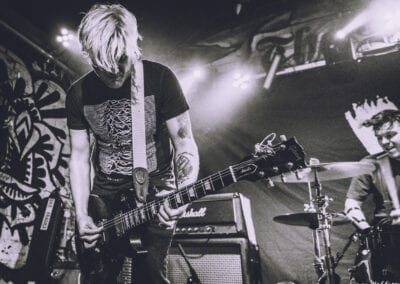 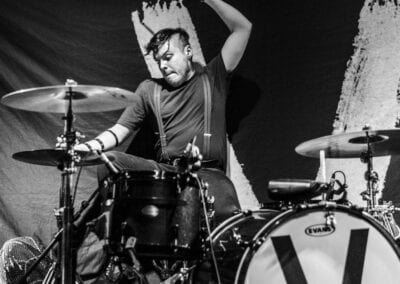 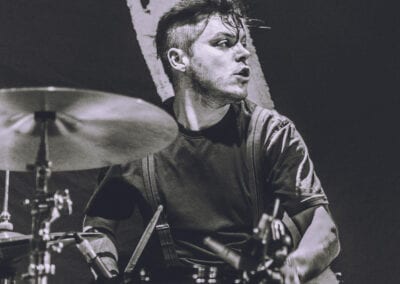 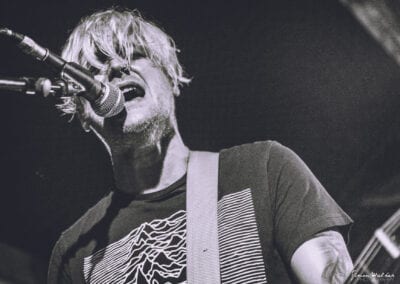 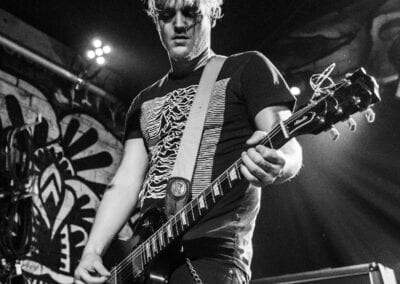 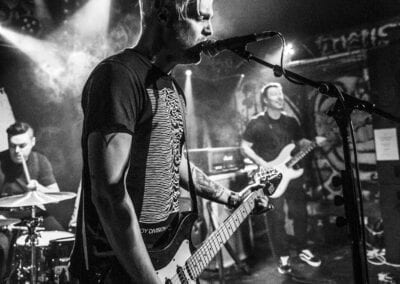 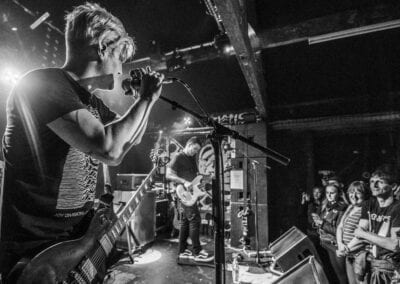