Rob Blackham, a music & portrait photographer based in Guildford. I first discovered Rob’s work when I saw a black and white portrait of Slash holding the ace of spades. The image really struck me in its bold simplicity. I loved his style and creativity resulting in searching for more of his work, which is just as impressive. Whether he shoots in a controlled studio environment, out on location, or just on the fly, each time he nails it. He has that ability to capture those moments in between the pose, which I find reveals and says far more about his subject(s). I was hooked and I’ve followed his work ever since.  I was honoured that Rob took the time out for a ‘chat’

How did you get started in music photography?

I attended Art school up in Birmingham & ended up messing around in darkrooms & roaming around with my Pentax SLR snapping away. After college, the band I was in got a record deal so I found myself putting all of my efforts into that & unfortunately my camera got stolen from backstage while I was on tour supporting Thunder & I just immersed myself in playing the guitar for the next 10 years or so until the band broke up & the photography bug returned with a vengeance, albeit digital instead of the 35mm film I’d grown up with.

My first proper photo pass job would have been at GUILFEST, a local legendary festival event where I took along my quite inadequate little Fuji compact & shot WAY too many photographs… My first lesson haha

This has got to be Rival Sons at Brixton Academy at the end of last year.  I’d been invited along to cover the band by the excellent OUTLAW magazine, I knew the guys & got to spend a bit of time before the show getting portraits (my main thang) in a pop-up studio & then having some great access during the show allowing me to roam around freely on & off stage… I got some of my favourite live music shots that night, a magical show!

I look for those moments & angles that the other photographers may not see. I believe the years I spent on stage as a touring musician really inform my process, it definitely helps me predict the movements of the performers in front of me.  Also, I love extreme lighting so I will always be crouching down trying to get an angle where the action is well lit.

Last year I got a phone call asking if I’d be interested in shooting some one-to-one portraits of Slash for the cover of the first issue of Outlaw Magazine.  Portraits are my main thing & it was a great experience to hang & chat guitars while we made a set of low key black and white pictures. With the A-listers, you never get a lot of time so you always have to have done your homework & all your equipment is 100% ready to roll when they rock up

I think I have quite a graphic style.  I will always sketch each set up before the session, my book of scribbles is always in my camera bag. I don’t tend to do a lot of work in post either.  I think coming from 35mm gave me a “get it right in-camera” kind of approach.  I don’t shoot a lot of frames in each session, I’ll be totting it up in my head as I go.  Once I feel it’s in the bag then that’s a wrap.  The same goes with live shows, a killer wide, a few closeups of each player, a few contextual shots (amps, pedals, random shit) & then I’m out of there to watch the show with the audience

You mentioned that you also shoot on 35mm. In this ‘instant’ age, what and why do you choose to shoot on film over digital?

I very rarely shoot JUST film.  In most instances, I will shoot parallel, with the digital files being edited easily and quick for the client & the film scans coming up the rear in a few days.  Film will only be used for certain bands or artists where I feel it may add something to the session.  I almost never shoot 35mm in a LIVE situation (digital is so much better in almost every aspect)

What do you consider the advantages of film over digital for your work specifically?

Each have their own merits.  90% of my commercial work is digital, albeit with a parallel 35mm set shot alongside

It’s my personal opinion, but I feel as though film has a more pleasing dynamic range & more forgiving for fine focus issues. I find film keeps me on my toes, by getting it right in camera, you only have a limited number of shots and there’ll be no RAW files to rescue you!

I’ll always carry a film camera in my kitbag, normally with a few different rolls of film stock.  I was recently sent some BERLIN stock by LOMOGRAPHY which I intend to try out this week on a shoot with an edgy indie artist. LOMO do some crazy emulsions!

Haha way too many to list.  I love all the old guys.  Live-wise it’s got to be Jim Marshall, Ed Caraeff & Neal Preston to name a few. Portrait photographers that inspire me would be Norman Seef, Annie Leibovitz, Elliot Landy and loads of others.  My favourite contemporary music guy would be Danny Clinch, a fucking genius 100%

I’ll just get stuck in.  I shoot punk & indie shows in grassroots venues all the time. I’ll just wade in get the shots & go with the flow.
I always try to be considerate of the paying punters & the performers.  One of my pet hates is the little gaggle of snappers that stand right in front of the stage ALL NIGHT, obscuring audience view & breaking that performer/audience connection – “In, out, Put the kettle on” that’s my thing

Get a secondhand full-frame DSLR & a cheap plastic 50mm lens & go to shows.
Start with your friend’s band or a local venue, watch YouTube vids, Shoot MANUAL, Make MISTAKES, Make notes.
Don’t worry about not having all the best, newest gear.  Don’t worry about what everyone else is doing, find your thing… Oh & DON’T CHIMP right in front of the band

I thought you said these questions were easy!
I’m gonna go with The Sex Pistols at one of their 100 Club shows in 1976.  It’s a shitty venue to shoot in but there’s something about THAT band in THAT space that would be magical to be a part of… Or The Who at Leeds obvs haha.

Black Futures
I’ve been working with these guys for a couple of years & this shot was taken during a break in filming for their video.  I decided we should all levitate, so they did.   Also a rare colour frame from me
Ginger Wildheart
The shoot that very nearly didn’t happen, there were “factors” but I have included this frame as it showed almost ANYTHING is possible if you do your homework & can adapt to any situation
Jay Buchanan/Rival Sons/Brixton Academy 2019
My favourite live shot.  The planets align sometimes. Right place, right time and then CLICK
Kenney Wayne Shepherd/O2 Shepherd’s Bush
The pit was RAMMED so I stepped to the side & shot KWS Vs the MOB
Otto from CRASHFACE
I love to drag the shutter when it’s a sweaty punk show.  An easy trick but even better if you get flipped off
Sir Tom Jones
Tom totally lost in the moment.  He later asked to use this shot for his tour that year.  It’s always nice to be in the presence of rock royalty
SLASH
Enough said
Temperance Movement
This is an out-take from the studio session for their last album.  A great bunch of guys, I hope they get back soon
Ty Taylor of Vintage Trouble goes surfing/ KOKO
I had a feeling he was “on the move” so I legged it into the Royal Box & managed to grab this one.  I LOVE “selfie guy”
All photographs © Rob Blackham/Blackham Images
See more of Rob Blackham here.
www.blackhamimages.com
Instagram 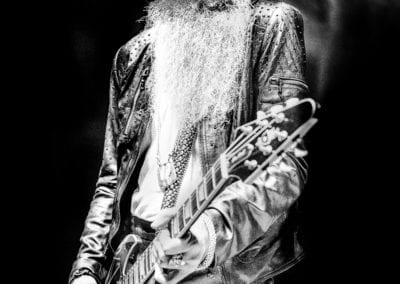 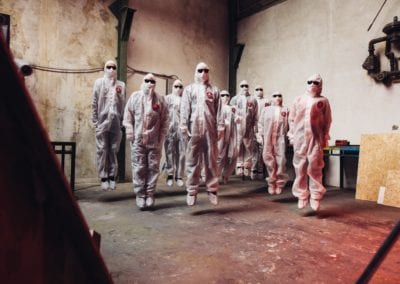 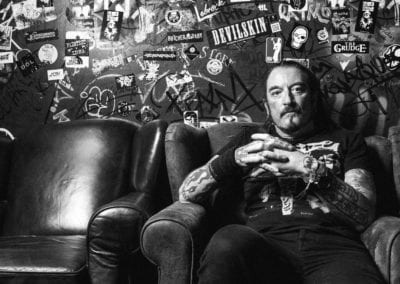 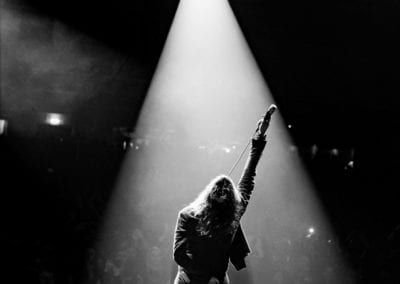 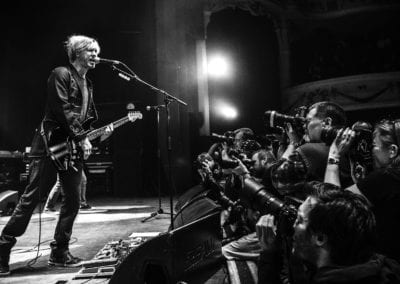 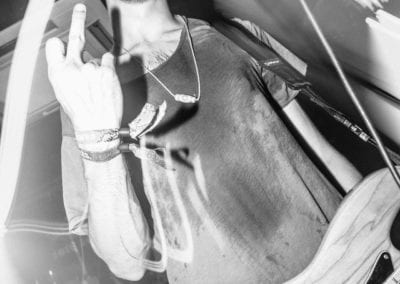 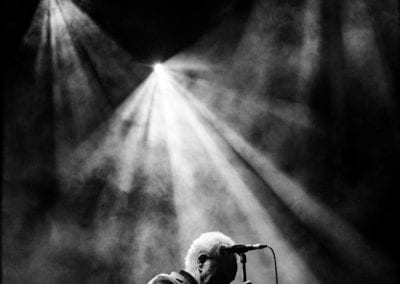 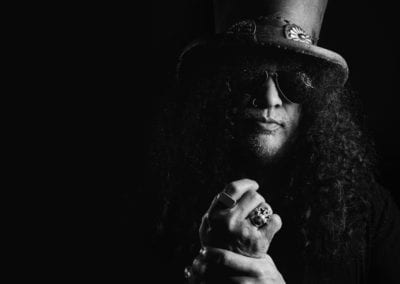 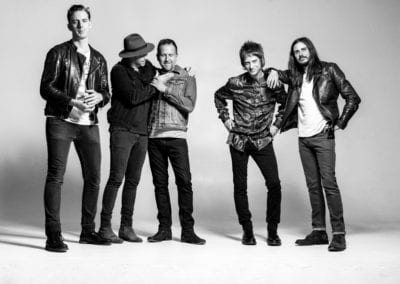 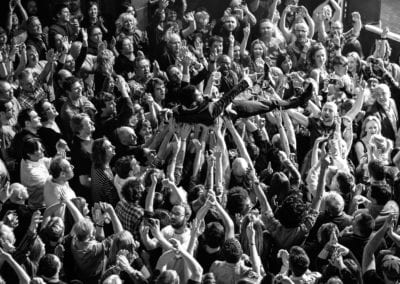