Kevin Nixon originally had a career in Architecture which took him to New York in the late ’80s, early ’90s.  After the economic crash, he was made redundant and was forced to return to the UK.  More as an act of desperation he tried his hand at photography, he bought his first real camera, a Nikon F4, a few lenses and a flash then naively touted his services as a photographer. Even though he’d always had a passing interest in photography, he had no formal training he was pretty much self taught. He read lots of magazines, went on a few courses.  Twenty nine years later, he claims to be “still bluffing his way through it”

I first discovered Kevin’s work when I used to subscribe to Classic Rock magazine. I’d often see his name in the photo credits.  After my first or second gig shoot back in 2015, I emailed him. I was blown away when he kindly replied with feedback on my shots and advice going forwards, which I continue to apply to my work to this day. “Capture the action” still runs through my mind during every gig.

Five years later I still peck his head for advice which im sure is much to his despair. When I decided to start this blog series, naturally Kevin was the first person I contacted.

I was very fortunate. I worked as an in-house studio photographer for a publishing company shooting mainly products and editorial. The company acquired a selection of music titles so it was a natural transition to start shooting for these magazines.

Yes, it was John Mellencamp at the Borderline in London many years ago. I was beyond excited at the prospect as I was a bit of a fan. It all ended pear shaped as the PR (who has since become a good friend) changed her mind when I got there and told me I could no longer shoot. She did let me take a few pics from the back of the venue and unsurprisingly they were rubbish!

For sheer ludicrous spectacle, excitement and fun it has to be the German metal band Rammstein. Their shows are simply insane with fantastic lighting, amazing pyros and special effects. A photographers dream. For energy, you can’t beat an Iggy Pop gig! I’ve been lucky to work as a tour photographer with a few bands so you do develop an affinity and loyalty once you get to know them.

You mentioned working as a tour photographer, and with great bands such as Def Leppard and Avantasia too!  How did your relationship with the bands begin?

With Def Leppard I was contacted by their London agent as they were looking for someone to cover a Teenage Cancer Trust gig at the Albert Hall. I got the gig and the relationship started from there. I had assumed it would be a ‘one off’ shoot but they subsequently asked me if I wanted to cover their upcoming world tour so obviously I jumped at the chance.

My relationship with Avantasia was as a result of being recommended by one of the band members manager. I initially shot a few portraits for Toby (the lead singer) we got on well and he asked me if I fancied joining them as their tour photographer. The experience with both bands has been a fantastic one, and possibly the pinnacle of my career in music photography. I often get asked how to get on board as a tour photographer and I have to admit that it is a combination of luck & nepotism as well as the ability to be able to take a half decent picture.

As a tour Photographer, how do you prepare for life on the road, and what’s a typical day?

I wish I could say it was all sex & drugs as well as the rock n’ roll but I would be lying! I have seen zero sex (must be my age) and the only drugs I have taken are laxatives! A typical day is travel/retouch, eat, gig, sleep and repeat ad nauseam. Typically you would arrive at the venue, set up your work station and cover the soundcheck and any backstage activity. The catering is generally very good so eating becomes a highlight. The gig itself is always great fun to shoot, you have an AAA pass which means you can shoot the whole show from pretty much anywhere you like so it does make it easier to capture the special moments. When you have the whole gig you become familiar with the different lighting setups and movement and interaction between the band members on stage. The days can be incredibly busy and as a tour photographer, you can shoot an awful lot of images which means lots of retouching, labelling and filing so a fast reliable laptop is essential.

I always make sure my kit is clean, have spare batteries and lots of memory cards. When you are on tour you do develop a strong bond between the band and crew, it is imperative that you can get on with everyone as it is like being in a self contained cocoon for the duration of the tour. At the end of the gig, it is the obligatory pizza and a beer (or two) generally unwind, download the images then on to the tour bus or a hotel. I must admit my preference is the hotel option, tour buses are great but I can’t deny they took a bit of getting used to. Overall it has been a rewarding, fun and exciting experience and I hope that I have a few more tours to look forward to.

I always try and capture the essence of the gig, the excitement, the atmosphere and passion. The lighting is obviously critical as well as the interaction of the band members. It also depends if you have just the first 3 songs or an AAA pass where you can shoot the whole gig where your approach can be a bit more measured.

Probably being on stage at Madison Square Garden in New York and getting a posed shot of Def Leppard at the end of the gig with the crowd and magnificent venue in the background.

Am not sure I would describe myself as having a particular style. I do like my images to have a certain punch and vibrancy although that would be more of a post production technique.

I do love black & white photography.  As a youth, I was influenced by Ansel Adams and more recently by Sebastiao Salgado.

Depends on the type of gig! If it is a hardcore heavy metal gig, with trepidation, my camera is way harder than my teeth and I have seen several photographers bloodied when its all kicked off. When it does get too insane I usually beat a hasty retreat and shoot the gig from a safe distance. For most gigs where there is no pit, get there in plenty of time, be nice to the people around you in case you occasionally block their view and you should be fine

The hardest part is obtaining access. Larger venues rarely allow pro spec cameras in their premises so a catch 22 scenario arises, you normally need some sort of portfolio before a publication or website will grant you accreditation! Start at your local smaller venues that are often more relaxed about camera rules. Practice your skills and build up your portfolio. Get a website and use social media to spread the word. Eventually you should be able to approach webzines, music publications or your local newspapers to try and obtain the all elusive photo pass. I have to be realistic and advise that if you wish to get into music photography to make money then I would forget it. Music photography can be exciting and great fun but very few people now are able to make a viable living from this. 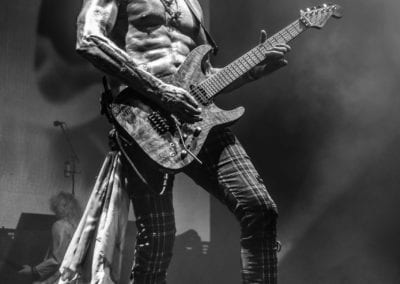 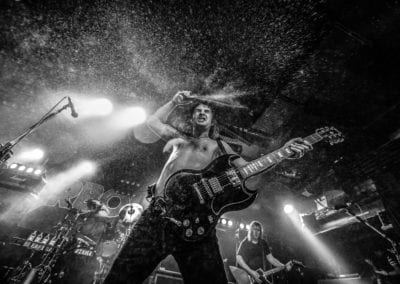 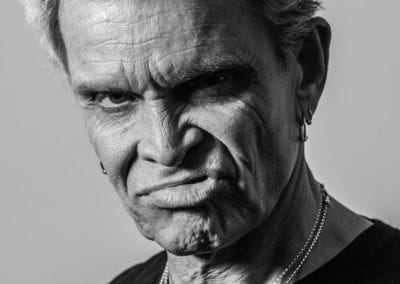 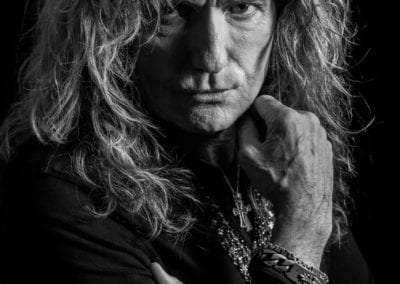 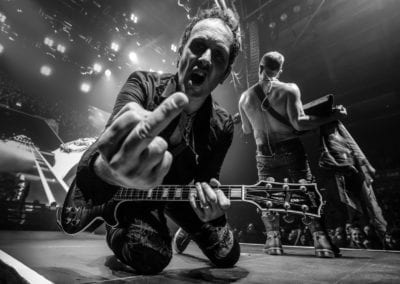 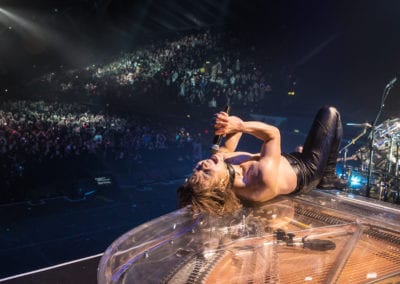 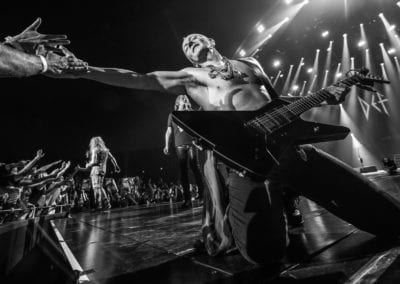 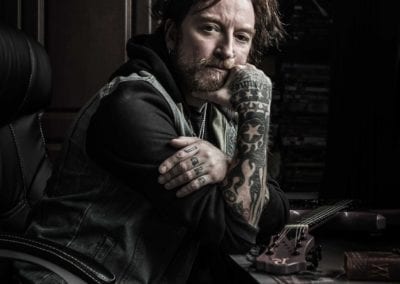 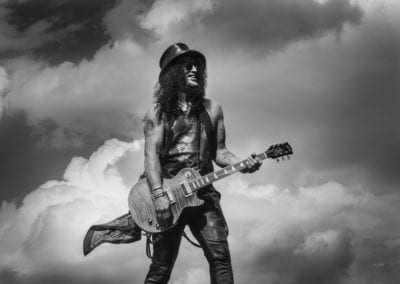 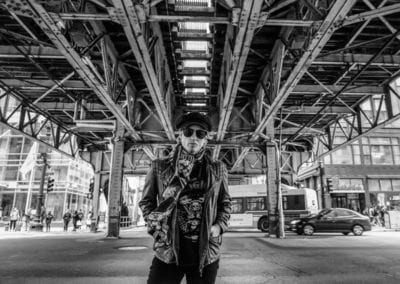