Shooting from the mixing desk 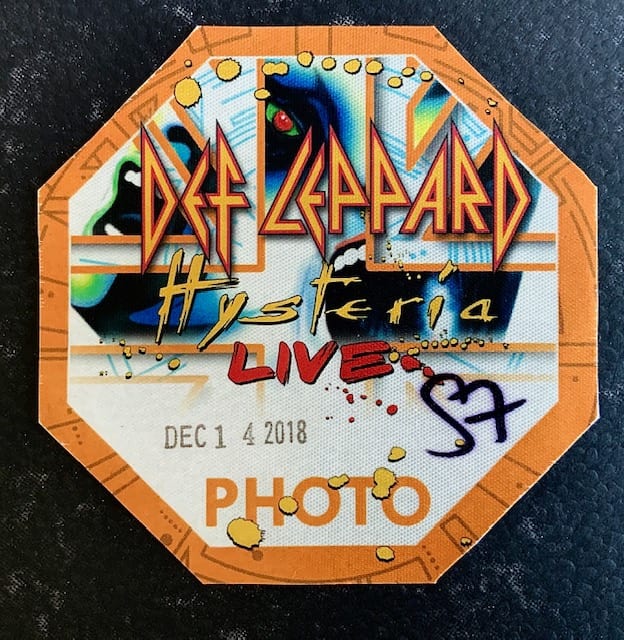 Sheffield band Def Leppard formed in 1977. It would be another 10 years before they release the album Hysteria, their best-selling album to date.

Thirty years later, they celebrate the release with their huge Hysteria Anniversary world tour. On the 14th December 2018, they played their homecoming show at the Sheffield Arena where they performed Hysteria in its entirety.

Getting access to photograph any Def Leppard show has strict requirements, this usually involves being accredited with the press or other publications. Unfortunately, I wasn’t representing anyone at this point so getting access was looking unlikely. However, it seems luck was on my side. A friend was also working on the tour, filming each show and documenting day to day life on the road, for the band’s social media and now the upcoming Hysteria at The O2 (London To Vegas) release.

He was kind enough to put a word to the promoter on my behalf and bingo! I landed myself a pass. Thanks, Lee.

The chance to shoot a band of this size, mid world tour show was unbelievable. I was incredibly lucky. The idea of being in the pit, even if for just 15 mins would be a once in a lifetime experience, especially for someone so new to music photography, such as myself. It later turned out this wasn’t to be. A lot of arena shows of this scale, for whatever reason, tend to put the shooting position from the mixing desk, which in this case was around 3/4 of the way back from the stage. My longest lens is a 70-200mm and I really needed a 300mm minimum to get as close to the action as possible.

It was 48 hours to the show, and I was without the kit I needed! I ended up renting a 300mm Prime lens, which I think ending up costing more than a ticket to the show itself, but I didn’t care, I wasn’t prepared to miss this opportunity. The lens arrived the morning of the show, talk about cutting it fine. This thing was like a bloody Cannon, it was huge, and shooting with it was like a 15 minute workout, I cared for it like a newborn baby, I didn’t fancy footing the bill should I drop it, that would’ve been one hell of a ticket price!

On arrival at the gig, I collected my pass and then was led to the press waiting area. As a photographer, you can’t just hang out in the arena with your camera. Some venues (mostly arena shows) have a strict protocol in which you are escorted to your designated shooting spot for the first three songs, before being escorted back to the waiting area, while you wait for the next band etc. It’s very organised. However, it’s a chance to hang out and chat with fellow photographers, in this case, Glenn Ashely and Mark Ellis who I’ve shot with a few times since I met him for the first time at the Leeds O2, in 2017. We’re waiting for our call to be escorted into the main arena, so during the wait, we’re setting up our gear. A cold sweat washed over me as I frantically searched my camera bag, where are my Memory cards???  Oh, that’s right, I’ve left them on my desk at home – FUCK!  Well, that lens was a waste of money I thought to myself!!  Mark kindly offered to lend me a couple of cards, but right at that moment, I discovered a card already in the camera which I’d placed in there in preparation though completely forgotten about.  Never forget your cards kids, should that card have been corrupt, for whatever reason, I would’ve been screwed and beyond embarrassed. Safe to say, this has never happened since – A valuable lesson learned, always double check your gear before you leave ho0me.

Showtime, we are escorted by security through the crowd to the mixing desk for the opening band Cheap Trick. This was very different from anything I’d experienced before and not without its challenges, in essence, you’re shooting from the crowd perspective and a fixed position, so you can often get heads and hands in your shots. There’s no opportunity for movement, dynamic angles or band-photographer interactions, as you often get in the pit. However, this scenario is a great way to capture the atmosphere of the event.

Cheap Trick opened the show and I’m pretty certain they were great, performing all their classics and but like all shows, I don’t remember much of their set in detail as I was too focussed on holding the 300mm without either smacking someone on the head or dropping it. I’ve since bought a monopod.

After the 3 songs, we were taken back to the waiting area to prepare for Def Leppard

In the meantime, Kevin Nixon who was the official tour photographer, briefly popped into the pen to say hello. This was a nice moment having been in contact since 2015, it was the first time I’d met him in person. Of course, he was working in an official capacity with his AAA. We all looked upon him with envious eyes. He gave us the heads up for the opening of the show which would have Phil Collen brightly spot-lit performing the opening riff to Woman. Then just like that, he was gone.

The house went down, the crowd erupted the show began, it was impossible not to get wrapped up in the atmosphere. If you’ve ever seen a Def Leppard gig or this show, in particular, it’s a full-on production spectacle. As I type, I’m listening to the Hysteria album, it’s helping me relive that amazing night nearly two years later.

Bright yellow spotlights hit Phil Collen, as Kevin had warned, before the track and the rest of the band kicked in and then they were off! Lasers, lights upon lights, a video wall, neons, it was overwhelming, the guys looked like they were having a blast, especially playing to their home crowd. Joe Elliot had Sheffield eating out of his hands. It was an unforgettable experience.

After we were escorted back to the waiting area to pack away our equipment, we were invited back into the arena to watch the rest of the show, minus camera for obvious reasons, but it was a fantastic way to end the evening.

In New York, March the 29th 2019, Def Leppard was rightfully inducted into the Rock & Roll Hall Of Fame

Below are some shots from the Sheffield show. 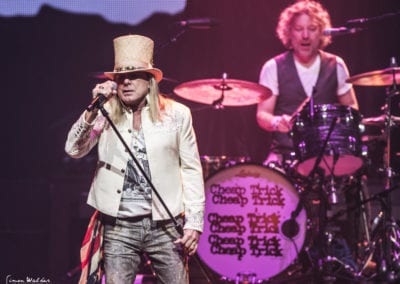 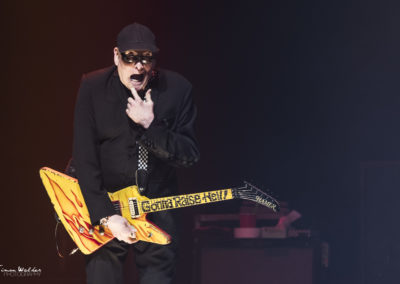 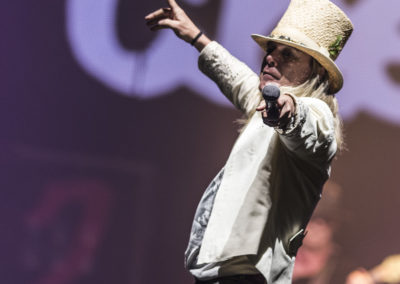 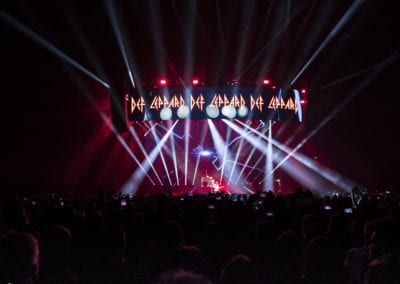 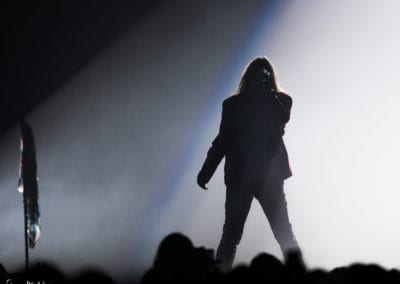 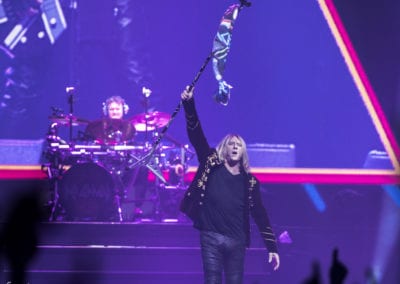 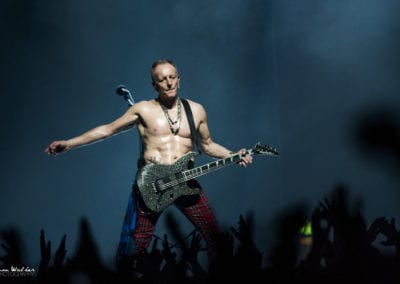 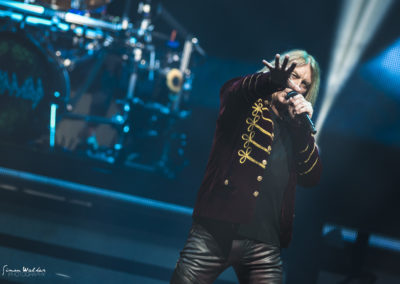 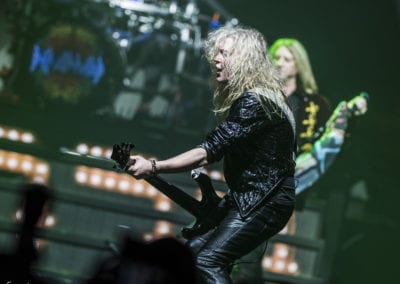 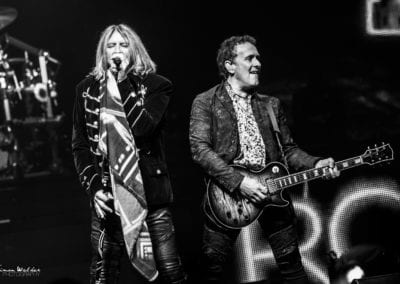 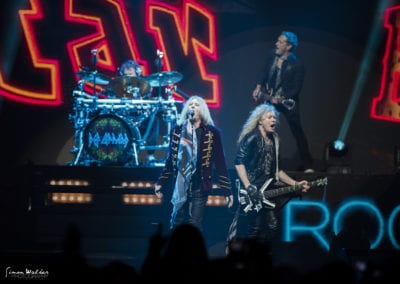 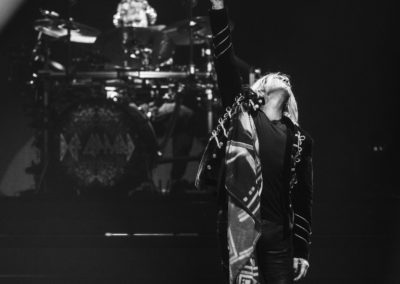 ← Getting an AAA photo pass Shooting My First Music Festival. →