The Jam were one of the most successful British acts to emerge in the late 1970s. with eighteen Top 40 singles including four number one hits, they broke up in 1982.  However realising that there was still a very real demand for the band’s Mod classics, original Bassists Bruce Foxton wanted to keep the musical legacy alive by forming From The Jam, with the help of singer and guitarist Russell Hastings.

Russell has been the only frontman to work with both Rick Buckler and Bruce Foxton since Paul Weller left The Jam and has been earning respect from fans across the world as a frontman along with his guitar skills.  As a genuine Jam fan, his passion and understanding of The Jam’s history is second to none and has toured the world playing to packed houses of Jam fans for years. Russell was also co-writer on Bruce Foxton’s last album “Back In The Room which reached Number 21 in the Independent Album charts and was received with great acclaim.

I recently caught up with Russell, here is what he had to say…

its been roughly 14 years since ‘From The Jam’ formed, how did you become involved in that process?

I knew Rick Buckler back in the early thousands and I guess I convinced him to get back playing the drums so we went in the studio and I worked him back in for about nine months and we took the band out on the road with my good friend and bass player Dave Moore named as The Gift. We spent a year touring that until our paths crossed with Bruce Foxton at a gig in Guildford where he was playing in a band called The Casbah Club and ended up on the same bill as us, he jumped up and did a couple of numbers and I guess the rest is history!

In regards to performing the songs, I think many fans will agree that you’ve successfully made the role your own. Looking back, how did it feel to become the ‘new’ frontman for what is such an iconic British band?

I was never directly a replacement for Paul, I get it that people want to compare me with Paul but someone had to fill those shoes and I thought long and hard about it and came to the conclusion that if it was done respectfully and with my own spin on it then it could work. It’s been an absolute honour to do what I have for so many years and also to create new music by recording three brand-new albums with Bruce.

Don’t get me wrong it was pretty terrifying in those early days coming out into the big venues like Glasgow Academy Newcastle Academy London but I was welcomed with open arms which I have been eternally grateful for.

Are you surprised there is still as strong a following of mod culture today as there was in the 50’/’60s?

No, not really as clothing and music have always been important to nearly every culture that has ever been and who doesn’t like to look good and feel good in lovely well-fitted clobber! It’s always been about the detail for me ie trousers the correct length, sleeve jackets not too long, shirt collars that fit correctly!

Who are your biggest Mod influences?

The usual suspects The Kinks The Who (early days) The Jam of coarse Small Faces etc as well as some pretty cool individuals!

From the Jam’ has played some amazing gigs both at home and around the world. What’s been your most memorable show/moment that you can remember?

Oh yeah hard to pinpoint just one, as you say very fortunate to play some great shows all over the world.

As ‘Foxton & Hastings’, you’re releasing a new album ‘The Butterfly Effect’ in September this year (2021), what can you tell us about the new record?

Just a selection of great pop tunes really, which again I’m really proud of! It seems just when you think you might have run out of ideas another one pops up and re-ignite the fire so to speak. It’s a great cathartic experience recording new songs in the studio and is a process we love but don’t get the chance too often as we are on the road touring.

How did 2020 affect that creative/recording process?

I think it was great from the creative point of view, but from a recording point of view was dreadful because we kept getting locked down and so unable to use the studio which was really frustrating! We’re just coming through that now thank God and looking forward to getting back in the studio to work on the Butterfly Effect.

Will you be touring the new album at all?

We will certainly be playing some tracks off of the new album at the live shows.

Yes, I really do as they are always great to use for future PR and for potential future products of course.

What are your thoughts on the ‘First three and out” policy for photographers attending a live show?

I tend to agree with it as it can be quite offputting particularly when there are so many photographers in the pit.

I almost think it’s the wrong way round and think I prefer it if we had file six songs to get warmed up then let the photographers in for three or four songs. I can be pretty rabbit in the headlights when you come out and all of a sudden there are seven or so photographers or clicking away and you have to try and keep your nerve with the crowd. I don’t know I guess it’s worked like it has for so many years why fix it if it’s not broken.

During the ‘first three’, are you conscious of the photographers in the pit and does this enhance or intimidate your performance?

Think I’ve answered this in the above. It depends on what mood I’m in whether it affects me on the night or not?
Adrenaline is a great drug when it’s working in your favour!! I tend not to notice too much of anything, to be honest, I just try and focus on what we’re doing.

Haha!! The obvious first ie do I look fucked? and is everyone happy with the shot? We tend to only publish very well-known photographers to us as we have had our fingers burnt in the past unwittingly. It’s a trust thing with photographers and us and a good working relationship with known professionals.

Would you rather see one ‘amazing’ shot of your show or a few ‘good’ ones?

One amazing shot definitely! You only need the one fantastic one! ie like Penny Smith shot of Joe Strummer and the ones she took of Paul and Bruce in 77 for The Modern World back cover.

Black-and-white always look fantastic but then so does a colour one if the lighting is good.

I fucking hate them but I guess it’s a sign of the times. Nothing worse than seeing somebody take a photograph and then want to put it straight onto Facebook which looks like they are just checking their emails and feels like we’re boring them shitless! I have been known to pull people up for getting too carried away videoing with their iPhones. It’s not good for the people around them either as they have to watch the gig through their screens!! Grrr pet hate of mine.

During a tour or whilst on an AAA pass, do you prefer your photographers to get involved in the action or keep their distance whilst behind the scenes etc?

Derek D’Souza is one of our chosen photographers with AAA as he’s trusted and knows what we like and don’t like. He can be in a room and I’ve never know! He also takes some pretty special photographs!

What would you consider makes or breaks a relationship between a band and a photographer?

Mutual respect really. Any photographers that we have worked with in the past have always been discreet friendly and a pleasure to have around.

Would you ever bring a photographer into the studio to document that creative process?

Yes, we don’t have a problem with that as long as it’s not in some of the more critical stages ie working stuff out prior to actually recording it. We usually have at least one session with a photographer in the room. Like I say it’s quite nice to have somebody document it who we trust and like and who doesn’t get in the way.

If we were to look at the artists you are listening too, who would be on your playlist?

Oh, a wide question with a wide answer. I run most days so have my playlists to run to but love random play which gives me The Pistols to Mozart do extremely varied. I’m not ashamed of any music. It’s either good or it isn’t and is very personal. I love running to Never Mind The Bollox, Uk Subs, The Who, The Jam, Erik Satie, Gaz Coombs The Beatles (of course I’m loving what The Stone Foundation are doing lately. Just lots of good music really. I’d be lost without it!

Finally, If you could open a show for any artist/band, past or present, who would it be and why?

Elvis or Bowie would be pretty exciting but that ain’t gonna happen. So I’m gonna go for The Gallagher’s or another fav band Ocean Colour Scene. Great band nice guys! 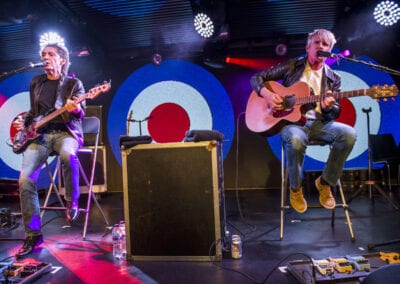 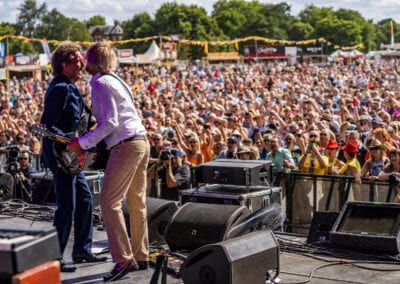 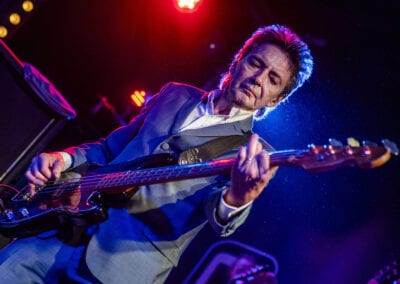 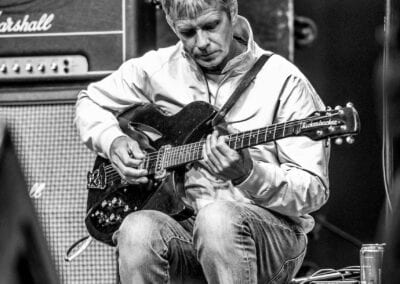 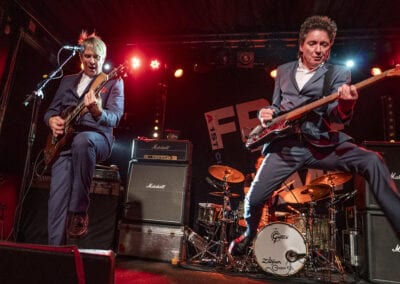 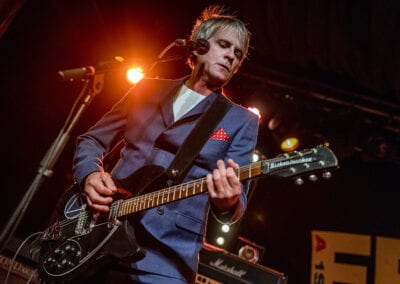 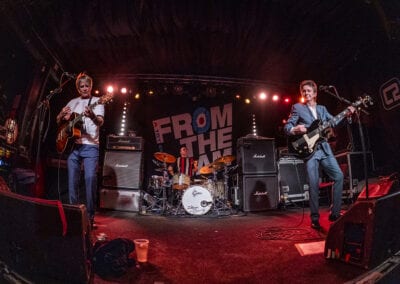 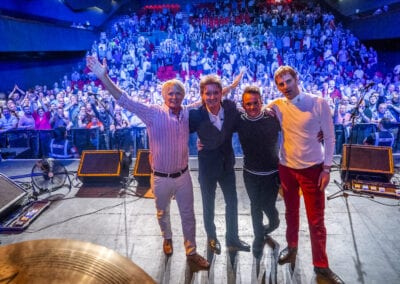 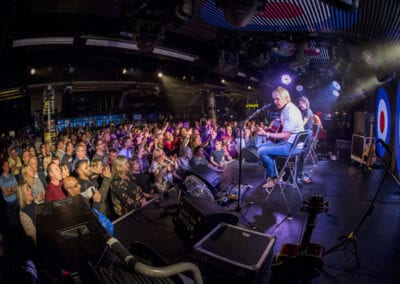 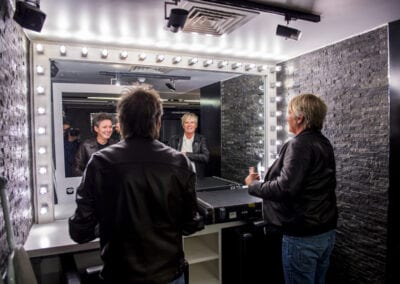 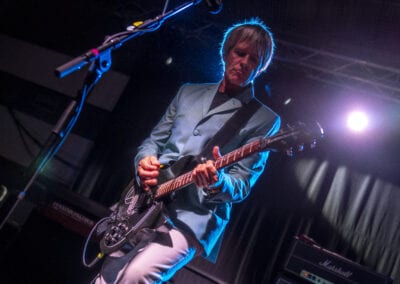 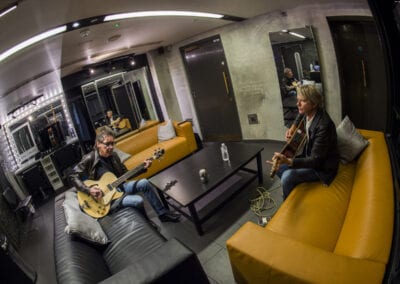